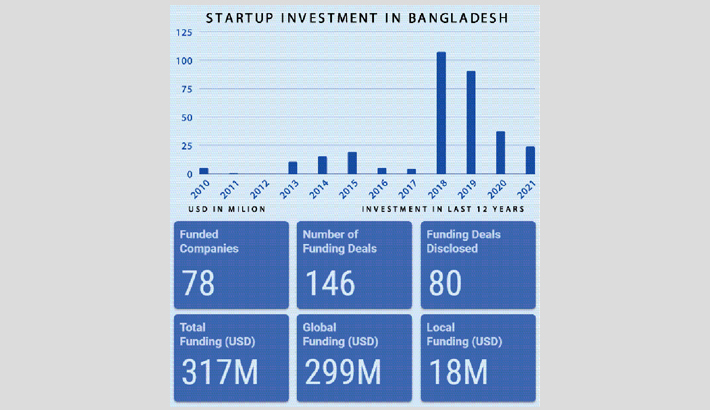 Bangladeshi startup companies have raised a total of $317 million in the last 10 years with 95 per cent of the funds coming from the foreign investors, according to a recent study.

Some 78 Bangladeshi companies have fetched investments through 146 funding deals of which 80 are disclosed so far till February 2021, according to research think tank Light Castle Partners.

According to the study report, some 50.58 per cent of investment came to startups in financial technology, followed by logistic and mobility (20.2 per cent), e-commerce (11.92 per cent) and consumer service (6.02 per cent).

Talking to the Daily Sun, government officials and sector insiders said the rising trend of startup businesses has made Bangladesh as a potential destination for investment.

The study report mentioned that startups in the financial technology and logistic sector are the major attraction for investors.

A startup is a young company founded by one or more entrepreneurs to develop a unique product or service and bring it to market, Investorpedia defined the business type.

Additional Secretary Syed Mujibul Haque, who looks after the iDEA project dedicated to the startup sector from the government’s side, said the government has already nominated 170 startups for collecting investment from different regions till February.

“From our side, we provide mentoring and funding support during the pre-seed stage to help their expansion to successful businesses,” he said.

The ICT Division formed a limited company titled ‘Startup Bangladesh’ with an authorized capital of Tk 5 billion to support tech-enabled businesses. The government agency has already funded 21 startups so far.

A startup is a young company founded by one or more entrepreneurs to develop a unique product or service and bring it to market, Investorpedia defined the business type.

Regarding the startup landscape in Bangladesh, researcher Bijon Islam, CEO of Light Castle Partners, said the startups in the country have maintained steady growth over the last decade. In terms of the source of funding, researchers mentioned that 58.9 per cent of the funding are foreign while 41.1 comes from local sources.