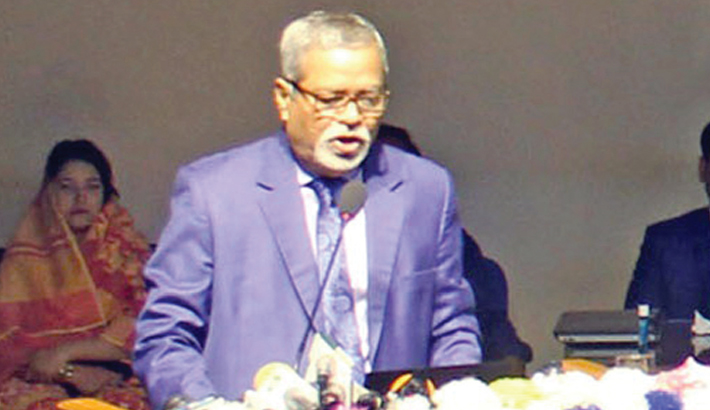 CEC KM Nurul Huda speaks at a discussion at the EC auditorium in the capital on Tuesday, marking the National Voters’ Day. — SUN photo

Talukder is doing everything possible to ‘demean, defame and undermine the EC’, he said while addressing a programme, marking National Voters’ Day at the EC Secretariat in the capital.

Earlier at the same programme, Election Commissioner Talukder alleged that the local government elections have become a model of irregularities, vote rigging and EVM vandalism.

“A level playing field was absent during the municipal polls across the country,” Talukder said. Other election commissioners and senior officials of the EC were present at the programme.

The CEC alleged that Talukder doesn’t work to serve the interest of the EC.

Slamming his colleague, Huda said, “Mahbub Talukder took a piece of paper out of his pocket and read all the negative aspects of the commission since the day he joined. And today is no exception.

“I thought he would say something about National Voters’ Day, but he has delivered a political statement.” Talukder said, “Election is the only path towards democracy. If an election is not held in a free, fair and acceptable manner, power cannot be transferred in a normal way.

Referring to Raozan municipal election in Chattogram where the mayoral candidate and 12 councillor candidates were elected unopposed, Talukder ironically said that the same model could be followed throughout the country.

Earlier on the occasion of National Voters’ Day, the Election Commission disclosed the updated voter numbers.

The number of voters now stands at 11.17 crore following the inclusion of some 19 lakh fresh voters in the last one year.