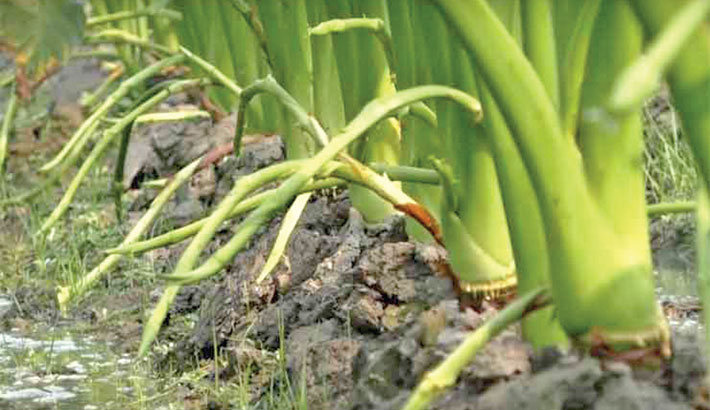 CUMILLA: Cultivation of kochur loti (Taro stolon) has gained popularity amongst farmers at Barura upazila in Cumilla as it is more profitable than paddy or other crops.

Here, farmers are currently selling 40 tonnes of Taro stolon – commonly known in Bangladesh as kochur loti – every day, to the tune of around Tk 5.40 lakh.

According to Barura’s kochu traders, 50 tonnes of this vegetable are sold every day during the peak season, which is March.

More than 2,200 tonnes of loti are produced here annually and 8 percent of the produce is exported, Upazila Agriculture Officer Md Nazrul Islam said.

This year, kochu has been cultivated on 260 hectares of land in the upazila; 1,500 farmers are engaged, with many more now involved in this profession for the last five years, he added.

Kochur loti has been exported for the last three years, although it has been cultivated here for more than a century.

The average price stands at Tk 20 per kg throughout the year. The cost of cultivating kochur raj, a variety of the vegetable, is Tk 900 per decimal, while another variety costs Tk 1,200 per decimal to cultivate.

Alongside men, many women are engaged in kochu farming. The men extract the loti and take them home. Women then clean them and put them into bundles to sell to local traders.

The vegetable is transported to Dhaka, Chattogram and Cumilla. A portion of it is exported to Italy, the United States, and the Middle East.  Abdur Rahum Mia, a farmer in Barura, has been cultivating kochur. This time he has planted it on 20 decimals of land, spending Tk 8,000. He said, “I will sell loti worth Tk 25,000.”

He said, “If easy-term agricultural loans were available and officials were more sincere, more people would have been involved in the cultivation.”

According to the district office of the Department of Agricultural Extension (DAE), kochur loti farmers of Barura were trained under the government’s Tuber Crops Project. A small number of farmers were initially brought under training, and the number will be increased gradually.

Md Nazrul Islam said, “We will arrange easy-term loans for the farmers.”

Barura Upazila Nirbahi Officer (UNO) said, “The upazila administration will provide maximum assistance to farmers with regards to the export and marketing of kochur loti.”