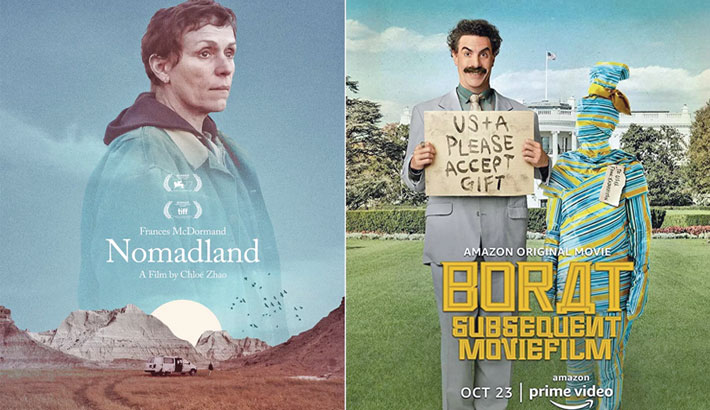 The biggest winners of the 78th Golden Globes were ‘Nomadland’ and ‘Borat Subsequent Moviefilm’.

The two films earned awards for best picture; ‘Nomadland’ for the drama category and ‘Borat Subsequent Moviefilm’ for the comedy or musical division.

Among notable achievements of the night, Chloe Zhao, the director behind ‘Nomadland’, became the first woman to win the best director award since 1984 when Barbara Streisand secured an award for ‘Yentl’.

Despite nominations for Black actors and filmmakers being sparse, winners were not in short supply. John Boyega, Daniel Kaluuya, Andra Day and the late Chadwick Boseman were all honored for their work during Sunday’s ceremony.

For the television awards ‘Schitt’s Creek’, ‘Queen’s Gambit’ and ‘The Crown’ dominated across acting and best series categories.

Much of the broadcast was overshadowed by the recent revelation that the Hollywood Foreign Press Association did not have any Black voters.

Tina Fey and Amy Poehler hosted the ceremony from opposite coasts, and didn’t pull any punches with the HFPA.

“We should have told you,” Poehler said. “Everyone is upset with the HFPA and their choices. Look, a lot of flashy garbage got nominated, but that happens. That is their thing. But a number of Black actors and Black-led projects were overlooked.”

“But even with stupid things, inclusivity is important,” Fey added. “There’s no Black members of the HFPA. You have to change that.”

The HFPA also used the broadcast to issue a statement about their plans to include more Black journalists and other minority reporters in its organisation in the future.

“Tonight while we celebrate the work of artists from around the globe, we recognize we have our own work to do,” Helen Hoehne, vice president of the HFPA said. “Like in film and television, Black representation is vital. We must have Black journalists in our organization.”

Many of Sunday’s winners used their acceptance speeches as a time to call for diversity and inclusivity in the industry at large.

“In the spirit of inclusion, I hope that this time next year, this ceremony reflects the true breadth and diversity of the film and television being made today, because there is so much more to be celebrated,” said Dan Levy, the writer and one of the stars of “Schitt’s Creek.”