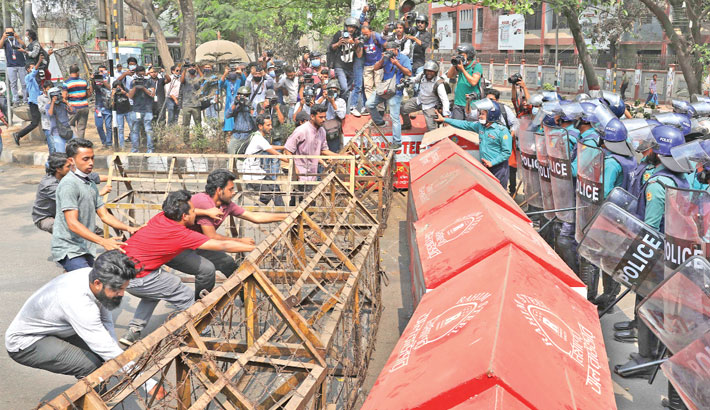 Protesters try to remove barricades on their way to lay siege to Home Ministry in the capital on Monday, demanding abolition of the Digital Security Act.

Police thwarted an attempt to lay siege to Home Ministry in the capital on Monday.

A group of leaders and activists of left-leaning student organisations marched towards the ministry, but police intercepted them near the secretariat.

As part of their previously announced programme, they attempted to lay siege to the Home Ministry over the death of writer Mushtaq Ahmed in prison and demanding abolition of the Digital Security Act.

After being barred, they took position on the street near the secretariat and staged demonstrations.

During the demonstrations, they also demanded the release of cartoonist Ahmed Kabir Kishore and their arrested fellows.

Over a hundred leaders and activists started a procession from the Dhaka University campus around 12:00pm.

Eyewitness said when they reached near the secretariat, police obstructed them. At that time, the demonstrators took position there to register their protests.

After ending the programme, police thanked the protesters as they concluded their programme peacefully, said Harun-Or-Rashid, additional deputy commissioner of Ramna Crime Division of police.

“We have requested them to stop in front of DPDC building and they complied with our request. They ended their programme peacefully. So, we thanked them,” he said.