Samia to challenge her demotion with court 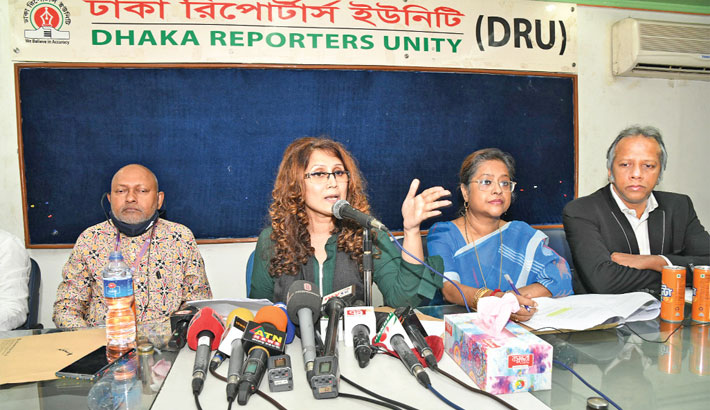 Alleging that she is a victim of vengeance and teacher politics, Dhaka University (DU) teacher Samia Rahman, who has recently been demoted on charge of plagiarism in her research paper, has said she is going to challenge the disciplinary action against her with court.

“I’m innocent. I’m a victim of university’s vengeance and teacher politics. I didn’t write and submit the research paper for which I was punished,” she said in a written statement in a press conference at Dhaka Reporters’ Unity (DRU) in the capital on Monday.

“I’d been silent so long due to pressure from the university administration and as the matter had been under investigation for four years. But now I’ll move the court as I have full confidence in the judiciary. I’ll do whatever needed to prove myself innocent,” Samia said.

She said the allegation of plagiarism against her is completely false. “The letter on the basis of which I was punished is a fake one. I have all the evidence.”

Samia claimed that she just shared an idea with Marjan about the research. “But all other things from writing the article to getting it printed in the journal were done without informing me.”

Explaining the matter, the DU teacher said she first came to know about it on February 2, 2017 through the dean of the Faculty of Social Sciences. “This controversial article was not written by me and I didn’t submit it for publication. Neither reviewer report was sent to me by the editorial board, nor was any letter of acceptance sent to me.”

‘Since I didn’t submit the article, the investigation committee and the tribunal did not find any documentary involvement of mine in the issue. I had just shared an idea with Marjan,” she said.

Samia said she received a complaint from DU in September 2017 that she and Marjan published an article titled “A New Dimension in Colonialism and Pop Culture: A Case Study of the Cultural Imperialism” in the Social Science Journal in December 2016 where part of Michelle Foucault’s “The Subject and Power” article published in the Chicago Journal was plagiarised.

The DU Syndicate formed a probe committee on September 27, 2017 after Alex Martin, the journal’s administrative assistant, filed a complaint against her through a letter, she said. “On the basis of the letter from the Chicago Journal, the DU probe committee recommended punishment and demotion for me. But the letter is completely fabricated.”

She also showed screenshots of some messenger chats with Craig Walker.

Marjan had confessed to the investigation committee that he was only responsible for the paper but the committee had ignored everything only to punish her, Samia said.

Speaking at the press conference, Barrister Tureen Afroz said Samia could not get any scope of self-defence. “She is a victim of media trial which has affected her mentally.”