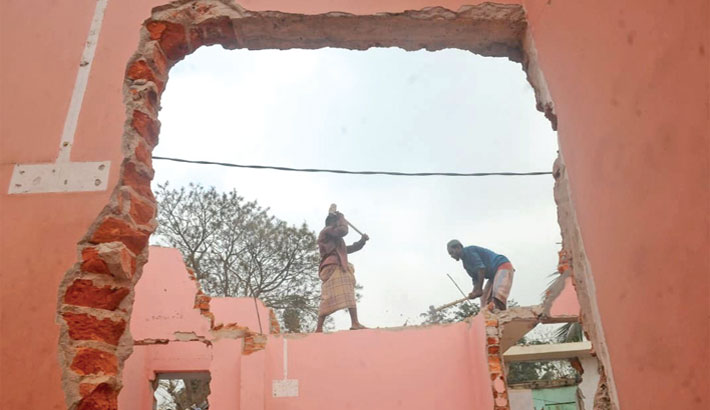 Workers demolish an illegal structure at Laldiar Char on the bank of the river Karnaphuli during an eviction drive on Monday. - SUN PHOTO

CHATTOGRAM: The Chattogram Port Authority (CPA) has finally started the much-awaited drive to demolish illegal structures from Laldiar Char on the bank of the river Karnaphuli on Monday.

A total of six executive magistrates with the help of around 1,000 members of law enforcement agencies started the drive at around 10:00am. It was one of the biggest eviction drives in the history of Chattogram, said sources concerned.

While visiting the spot, CPA Chairman Rear Admiral M Shahjahan said around 90 per cent residents left the area before starting the drive and rest were leaving gradually.

They didn’t evict anybody or any structure forcibly and the recovered land will be fenced after demarcation, he said.

The drive was the peaceful one in the history, observed the port chairman.

CPA has taken initiative to recover their land at the Laldiar Char following a High Court order.

Protesting the move, the residents of the area carried out different protest programmes and demanded rehabilitation of the families.

Earlier, State Minister for Shipping Khalid Mahmud Chowdhury said that the High Court asked the port chairman to appear before it for informing the development regarding the eviction from the bank of the Karnaphuli. So, there is no scope to keep the illegal structures at the Laldiar Char.

Defamation of reputation of Chattogram Port for few people will not be tolerated, he said then.

A list of those who are working against the eviction move has been prepared and they will be brought under trial, warned the state minister.

The homeless people will be rehabilitated, he said adding that most of the people living in the area are tenants.

Earlier, the Chattogram district administration demarcated bank lines of the river as per the High Court order issued on July 18 in 2010 following a writ petition filed by the ‘Human Rights and Peace for Bangladesh.’

They also identified over 2,000 small and large illegal government and private structures on the both banks after completion of the demarcation in 2015.

In August, 2016, the High Court also directed to evict some 2,106 structures built illegally on the river banks following some procedures.

Later, the administration started demarcating the bank lines afresh as part of eviction drive to free it from encroachers in 2018.

The much-awaited drive to evict illegal structures from the river banks started finally on February 4 in 2019.

But, the drive got stuck over legal complexities after evicting several hundred structures.

Following a petition submitted by the CPA, the High Court directed the authority to evict the illegal structures from the Laldiar Char on December 8 last year.

The court also set a deadline till March 9 to submit report regarding the eviction drive, said sources.