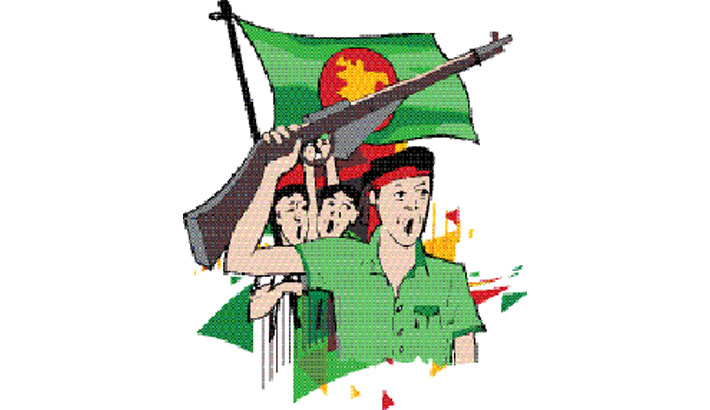 On this day (March 2, 1971) 50 years ago, the valiant people of yet-to-be-independent Bangladesh declared that a new country is about to secure its place in the world map by waving its flag for the very first time.

It was a turbulent time. The sudden radio announcement postponing the inaugural session of the Pakistan National Assembly, which was scheduled to begin on March 3, by military dictator Yahya Khan on March 1 made the mass people furious.

The first flag, a red circle symbolising the rising sun nestled in Bangladesh’s golden map in the centre with a green background, was conceived and designed by Cumilla district Chhatra League General Secretary Shib Narayan Das.

A group of spirited youths of Dhaka University, led by ASM Abdur Rob, the then vice-president (VP) of DU Central Students’ Union (Ducsu), hoisted the flag publicly for the first time.

The flag was unfurled on the rooftop of the western porch of the Arts Faculty of the university so that hundreds of students and general people who were present there could witness a historic event easily.

They saluted the flag, expressed their solidarity with the movement for independence and made a commitment to liberate the country from Pakistani oppressors under the leadership of Father of the Nation Bangabandhu Sheikh Mujibur Rahman.

On that day, a large student meeting, chaired by Chhatra League President Nur-E-Alam Siddique, was held on the DU campus where student leaders delivered fiery speeches and pledged to continue to fight till the end.

Later, the Pakistani flag was pulled down and the new flag was hoisted at Dhaka University and on the secretariat premises.

The government imposed curfew on that night but students took to the street defying restrictions and agitated mass people joined them.

Breaking the curfew, they formed barricades in different parts of the city. The processions of agitated people became targets of bullets at DIT intersection and in front of the Governor’s House.

Bangabandhu Sheikh Mujibur Rahman condemned the ruthless killing of unarmed people and declared province-wide hartal every day from 6am-2pm from March 3 to March 6, 1971.

The first waving of the national flag ultimately accelerated the movement towards the great Liberation War.