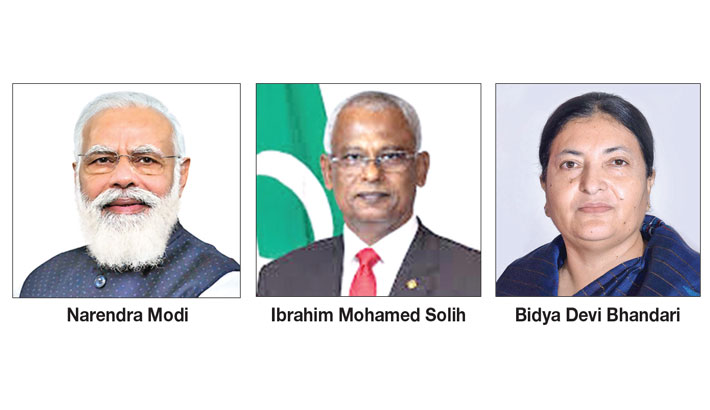 The heads of state and government of three South Asian countries are expected to visit Dhaka in between March 17 and 26, highly placed sources at the Foreign Ministry said.

Narendra Modi is set to visit Bangladesh on March 26-27 to join the celebrations, marking the golden jubilee of Bangladesh’s independence, 50 years of Dhaka-Delhi diplomatic relations and Bangabandhu's birth centenary, they said.

Diplomatic sources said as Bangladesh is going to celebrate 50 years of its independence, bilateral relations between India and Bangladesh will be consolidated further and more focus will be given on a shared future.

The Presidents of the Maldives and Nepal are likely to visit Dhaka before March 26. Foreign Ministry officials said their visits will play a significant role in boosting trade, tourism, connectivity and cooperation in a number of areas.

Apart from joining the celebration programmes, the leaders of the three countries will hold summit meetings with Bangladesh Prime Minister Sheikh Hasina during their visit.

The heads of state of Turkey and Hungary were scheduled to visit Bangladesh to join the celebrations, but their trips have become uncertain due to the ongoing Covid-19 pandemic.

Officials said Jaishankar and Momen will review the sector-wise progress of India and Bangladesh projects, implementation of various deals signed in recent times, including those signed in December last year. Jaishankar is expected to pay courtesy call on with Prime Minister Sheikh Hasina.

During the virtual summit on December 17, 2020 both the prime ministers jointly inaugurated the Chilahati-Haldibari rail link between India and Bangladesh which has been inoperative for almost 55 years. They also inaugurated a digital exhibition on Mujibur Rahman and Mahatma Gandhi in an effort to celebrate the life and legacies of the iconic leaders.

A number of major agreements are expected to be signed between the two countries during Modi’s upcoming visit, including those on energy, communication, trade, border management, blue economy, vehicular movement between Bangladesh-India-Nepal and disaster management.

In recent times, there has been increased engagement between the two countries despite the corona pandemic.

"We need to remember and carry forward the understanding that our relations are based on history. 1971 is the foundation stone of our relationship. It also means that we share so much more than what could divide us," Indian High Commissioner Vikram Doraiswami has said recently.

Bangladesh is special as a friend and relations with Bangladesh is the cornerstone of India's foreign policy, he added.

India sent two million doses of the Covid-19 Oxford-AstraZeneca vaccine produced by the Serum Institute of India (SII) as gift for Bangladeshi people. Besides, India is providing vaccines on regular basis as per the commercial deal with the SII.

Bangladesh has been urging India to quickly settle the Teesta water-sharing issue in the greater interest of the bilateral relations.

The Modi government has given commitment to Teesta deal but conveyed the message to Dhaka that the water-sharing deal could only be signed once there was domestic political consensus over it in India. West Bengal Chief Minister Mamata Banerjee is yet to give her approval to the proposed deal.