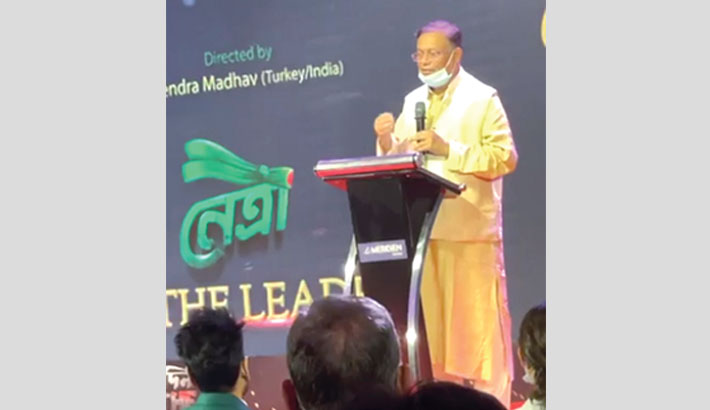 Information Minister Dr Hasan Mahmud speaks at the introduction ceremony of cast and crew of two upcoming films named ‘Din: The Day’ and ‘Netri: The Leader’ at a hotel in the capital on Saturday.

Information Minister Dr Hasan Mahmud on Saturday said films played a significant role during the War of Liberation and in building the nation after the independence of the country.

“Films speak about life. A good film could play a vital role in exploring the intellect and conscience side by side with building the state, the nation and the society,” he said while addressing a reunion of artistes of Bangladesh, India, Iran and Turkey for two films of actor Ananta Jalil titled ‘Din: The Day’ and ‘Netri: The Leader’ at a hotel in the capital, reports BSS.

The minister said films preserve the contemporary period. “If we see a film which was made before 50 years ago, then we can see the lifestyle of 50 years ago. It (films) preserves the history also. Films could play a role in building the nation,” he added.

The information minister said a number of timeless cinemas were made and artistes were born through the FDC and the movies had played a role in building the movement of independence, struggle of freedom and building post-independent Bangladesh.

He said the present government under the supervision of Prime Minister Sheikh Hasina has taken various initiatives for the industry (film) to bring back the golden days and to capture a dignified position in the global screenland.

“In order to bring back the golden period of the film industry, the government, as per the directive of Prime Minister Sheikh Hasina, plans to open up closed cinema halls, renovate the old ones and introduce new movie theatres for the movie lovers,” said Hasan.