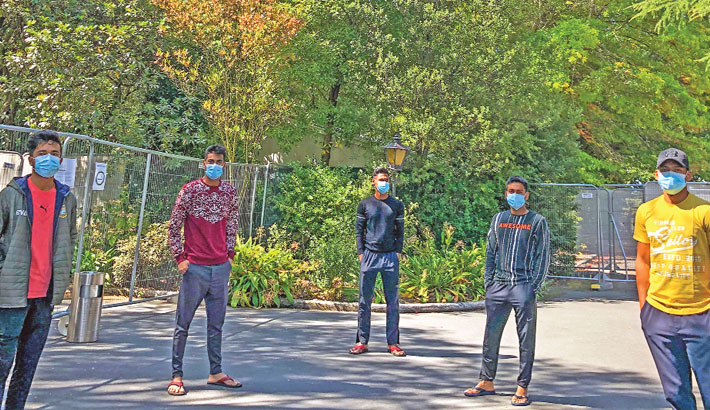 Bangladesh cricketers pose for a photo in a walking session in Christchurch, New Zealand on Sunday. –BCB photo

Bangladesh off-spinner Mehidy Hasan said on Sunday that it felt like being in the jail as they remained locked inside their hotel room for the first three days due to quarantine purposes.

“The first three days we were in the room. Then everyone got a chance to go out for half an hour. My head was spinning a little when I first went out yesterday. Then after 10-15 minutes, it became normal,” Mehidy said.

“I feel I was in the jail (like a prisoner) during the opening three days and it was frustrating in the room,” he said.

“But when I came out and got adjusted to the weather, felt a little better. When I returned to the room, I felt a little fresh. It doesn't feel good to be in the room all day. It's actually a little uncomfortable for us spending three or four days in a room, in the same way, and so when we get chances to go outside for thirty minutes, it feels good when I returned into the room,” he said.

Bangladesh reached New Zealand safely on February 24 and started their 14-day quarantine at the Christchurch Chateau on the park Government Quarantine Center.

Bangladeshi cricketers are following the COVID-19 guidelines sent by the New Zealand Cricket Board and according to it, the visitors were locked in the room for opening three days and later they were allowed to walk for a couple of minutes inside the premises maintaining distance.

After the opening seven days, the visitors will be allowed to start their practice session in groups that will be comprised of five cricketers while after completing the process for the next six days (that will also mark the end of the 14-day quarantine) they are allowed to go for the full-fledged practice and the tourists are expected to have a five-day training camp in Queenstown following a 14-day quarantine.

“After six or seven days when we will start going to the gym and field, we will feel better. It is difficult to spend time now,” said Mehidy adding that it would have been better if they could use the gym during this lockdown.

“It would be good if we could get some gym facilities or could do some works in the room now. We could spend some time by doing these as well as the body would be more fit but since there is no opportunity (three is no point grumbling),” he said.

“You can understand how we are passing the days. For the first time spent five days at a hotel like this. It was tough at first, haven't seen anyone on the first three days,” he said.

Bangladesh team had previous experiences of remaining in bio-bubble when they played some domestic tournaments as well as playing against West Indies back at home but certainly, this is a new experience for them.

All the members of the Bangladeshi contingent were found corona negative in their opening test while they will have to give a test on two more occasions in the first week.

The series was earlier pushed back by a week due to the ongoing challenges in the COVID-19 environment.

The three ODIs will now be held on March 20, 23 and 26 in Dunedin, Christchurch and Wellington respectively while the three T20Is will take place on March 28, 30 and April 1 in Hamilton, Napier and Auckland respectively.