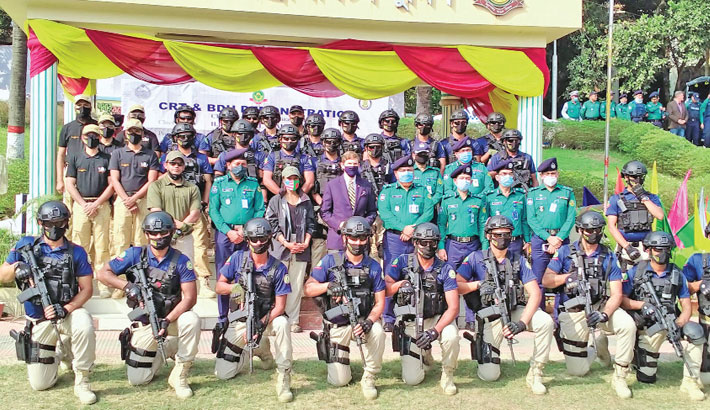 Members of the Crisis Response Team (CRT) and the Bomb Disposal Unit (BDU) of Chattogram Metropolitan Police pose for a photograph with US Ambassador to Bangladesh Earl R Miller after a joint exercise on CMP Police Lines ground in Chattogram on Sunday. SUN PHOTO

CHATTOGRAM: US Ambassador to Bangladesh Earl R Miller said that Bangladesh police are their partner in the global fight against terrorism.

He said this after visiting the joint exercise of Crisis Response Team (CRT) and Bomb Disposal Unit (BDU) of Chattogram Metropolitan Police (CMP) at CMP Police Lines on Sunday.  Thanking policemen, the ambassador said nothing is more important than the duty of law enforcers, as they are entrusted with the task of ensuring security for people all over the country.

Miller said he also worked as a police officer for 24 years. Policemen are not thanked properly for their duty as they work to make people’s life safe, he said.

It may be mentioned that the month-long CRT Mentorship and BDU Mentorship programme under Anti Terrorism Assistance of US Department of State was organised to increase the strength and skills of CRT and BDU members.