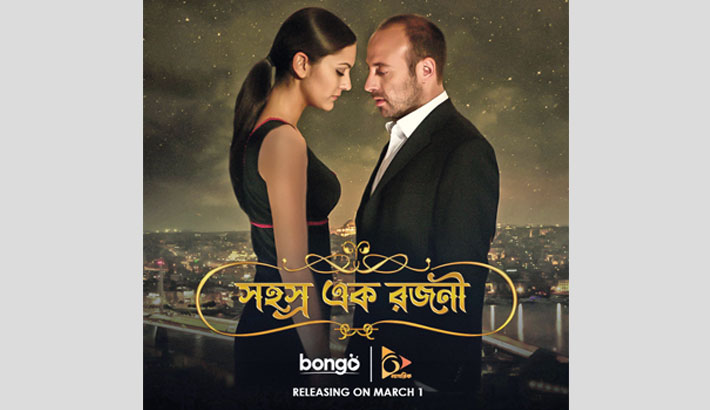 Turkish series is already very popular among Bangladeshi viewers. Considering the context of this popularity, the country’s first and largest video streaming platform ‘Bongo’ is about to release the popular Turkish series ‘Sohosro Ek Rojoni’. Along with the digital platform Bongo, the drama series will also be aired on the private television channel ‘Nagorik TV’ from March1.

In the series ‘Sultan Suleiman’ based on historical events, the popular Turkish actor ‘Halit Ergenç’ won the hearts of the Bangladeshi audience by playing the role of Emperor Sultan Suleiman. The actor has also played a central role in the drama series.

The story of this series is based on the modern version of the ancient collection of Middle Eastern folk tales ‘Arabian Nights’. The story of the life struggle of a widow named ‘Sehrazat’ with her only sick child will be revealed in ‘Sohosro Ek Rojoni’. The characters in this drama series are so popular in some Latin American countries that many have named their children Sehrazat and Nur.

About the drama series, Bongo’s Chief Content Officer Mushfiqur Rahman said, “Although it is a Turkish drama series, we hope it will win the hearts of Bangladeshi viewers because of the consistency of the story and the fact that we broadcast it in Bangla.”

From March1, the series will be broadcasted in full Bangla on the video streaming platform 'Bongo’. The series will air 6 episodes every week. Visitors can enjoy this drama series from Bongo Android/iOS app and website (www.bongobd.com). Also, the series will be aired on the private television channel 'Nagorik TV' from 1st March.