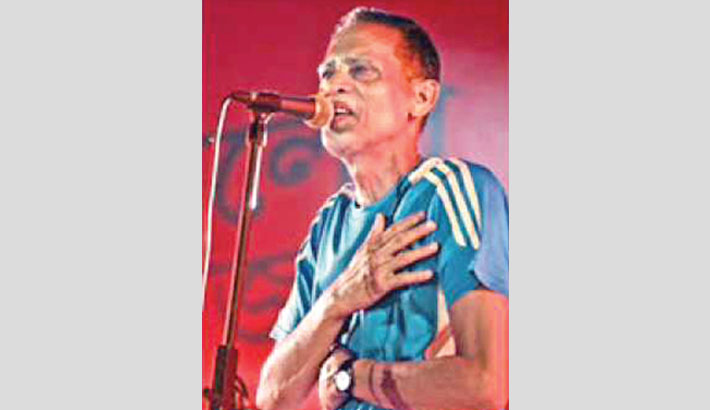 Today is the 71st birth anniversary of Azam Khan, the pioneer of the pop music in the country. Azam Khan was called as Pop Guru of Bangladesh.

Mahbubul Haque Khan, popularly known as Azam Khan, was born in Dhaka on February 28 in 1950. He had been interested in music since his childhood and ultimately began his music career in his hometown with the group ‘Trinity Artist Group’ in 1967. He attended in the 1969 mass uprising, against the Pakistani army. In 1971, inspired by his father, he and his brothers took part in the Liberation War of Bangladesh. He was trained in Meghaloy, India. He fought in the Sector 2, under Major Khaled Mosharraf.

In mid-December, 1971 he came back from the camps and started his music career again. He found the pioneering rock band ‘Uchcharon’, along with his friends Nilu (lead guitars) and Mansoor (rhythm guitars), Sadek (drums). They first appeared on Bangladesh Television in 1972. They got commercial success with the hit ‘Rail liner Bostite’ in 1975. Releasing more hit songs in the 1970s, like ‘Alal O Dulal’, ‘Saleka Maleka’ and "Papri Keno Bujhe Na’.

His contribution to the music industry, brought him the second highest civilian honour award ‘Ekushe Padak’, which he was awarded posthumously in 2019 and also earned the honorific nicknames ‘The Pop Samrat’ (The Pop Emperor) and ‘The Rock Guru’.

The legendary singer breathed his last at Dhaka CMH hospital on June 5 in 2011.