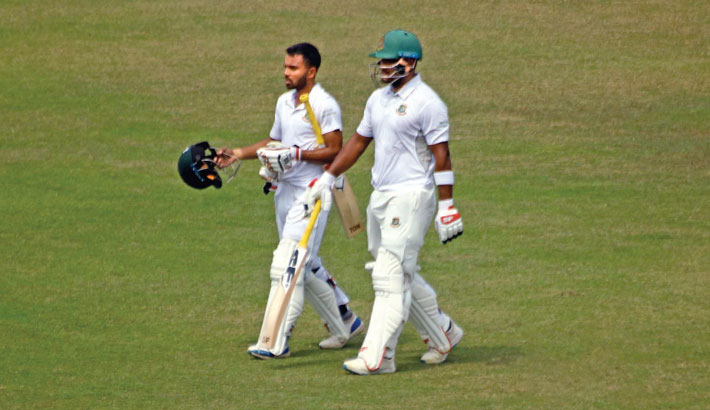 Bangladesh batsmen Towhid Hridoy, left, and Yasir Ali leave the field after their innings at the Zahur Ahmed Chowdhury Stadium in Chattogram on Saturday. — BCB PHOTO

Bangladesh Emerging Team left-arm spinner Tanvir Islam continued his domination over the Ireland Wolves batsmen to leave the visiting side in a shaky position on Saturday after day two of the lone four-day match at the Zahur Ahmed Chowdhury Stadium in Chattogram.

Ireland Wolves are trailing by 127 runs in their second innings. The tourists were batting at 35 for four in 20 overs at the end of the day's play. Harry Tector and Curtis Campher remained unbeaten for two each.

Left-arm spinner Tanvir Islam, who bagged five wickets in the first innings for Bangladesh Emerging Team, has taken three wickets in the second innings so far while right-arm fast-bowler Ebadot Hossain scalped one.

Earlier, in the first innings of the match, Ireland posted 151 in 67 overs after choosing to bat first, winnings the toss.

Curtis Campher scored 39 runs for Ireland in the first innings, but no other batsmen were able to cross the 20-run mark.