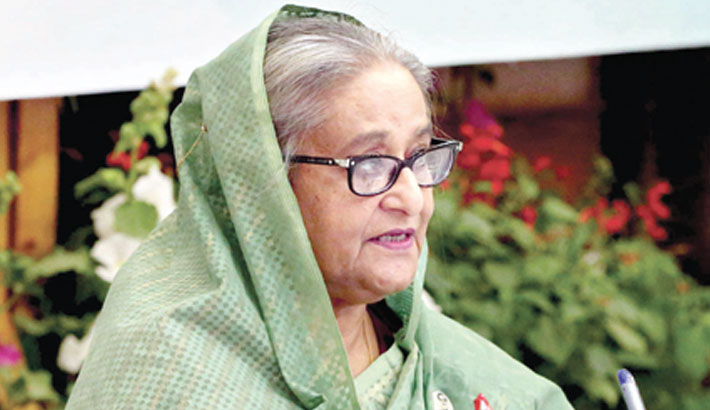 Prime Minister Sheikh Hasina said on Saturday that the United Nations’ final recommendation for Bangladesh’s graduation to a developing country from the least developed country (LDC) status is a historic event.

“It’s the first step for Bangladesh to turn the country into a middle-income one by 2031 and a developed one by 2041. We’ll be respected by the world after the graduation from the LDC status,” she told reporters at a virtual press briefing.

Sheikh Hasina, also the president of the Awami League, joined the press briefing from her official residence Ganabhaban while journalists joined it from the Prime Minister’s Office in the capital.

The Committee for Development Policy (CDP) of the United Nations (UN) on Friday recommended Bangla-desh’s graduation from the LDC status for fulfilling its all three eligibility criteria for the second time alongside Nepal and Lao PDR.

Mentioning that the milestone has been achieved with the combined efforts of all, the prime minister said her government will do everything to address challenges to maintain the status.

“We’ve already started preparations to face the challenges after the graduation and we do believe we can do that,” she mentioned.

The premier said getting the final recommendation from the CDP is a matter of joy and pride for the nation.

Sheikh Hasina said the transition was made at a time when the country is celebrating the birth centenary of Father of the Nation Bangabandhu Sheikh Mujibur Rahman and is set to celebrate the golden jubilee celebration of the country’s independence.

“We’ve achieved the eligibility for graduating to the developing country status. Now it is a challenge to keep the status. And I will do everything to address the challenge of upholding the recognition,” she added.

Giving full credit to the countrymen at home and abroad for the achievement, the PM said she was very happy being engaged with the process.

Being a daughter of the Father of the Nation, Sheikh Hasina said she feels proud of this achievement as she herself remained engaged in the process of development strides.

“UN Committee for Development Policy (CDP) reviews the issue of a country’s graduation from LDC based on income per capita, human assets, and economic and environmental vulnerability,” she said.

In continuation of Bangladesh’s fulfillment of these criteria in the first triennial review meeting of the CDP in 2018, she said Bangladesh also met all the three criteria this year for graduation from LDC status to a developing country.

“I dedicated the achievement for the new generation which will take the country forward and turn it a developed and prosperous one,” she said.

Referring to her government’s relentless efforts and hard work for the last 12 years in getting the status, the premier said the countrymen did all the things while the government provided the policy support to create the scope.

The premier expressed her desire that Bangladesh would get its place as a dignified country at the world stage following its graduation as a developing nation.

“Father of the Nation Bangabandhu turned Bangladesh into a least developed country, pulling the war-ravaged country in just three and a half years. And Bangladesh Awami League - a party founded in the hand of the great leader - established the country as a developing nation in this Golden Jubilee year of independence,” she said.

According to the UN, a country is eligible to graduate from the LDC category if it has a gross national income (GNI) per capita of $1,230 or above for three years, a Human Assets Index (HAI) of 66 or above and an Economic Vulnerability Index (EVI) of 32 or below.

Besides, Bangladesh has already been self-reliant in food, fish, egg, meat, and vegetable production, while it is the third in the world in terms of paddy production, she added.

In this regard, Sheikh Hasina mentioned that today’s Bangladesh is not as it was an ‘era ago’.

The prime minister said, 99 per cent people have been brought under electricity coverage, digital services have been expanded up to marginalised people in villages, and a revolutionary change has taken place in the ICT sector through Bangabandhu satellite.

“Considering all these achievements, Bangladesh is now a changed country in the world,” she said.

Talking about the corona pandemic, Sheikh Hasina said 2020 was a critical year not only for Bangladesh but also for the entire world due to the Covid-19 outbreak.

She, however, mentioned that the government has been able to keep the national economy moving by taking various steps like giving financial assistance and stimulus packages to affected groups.

Sheikh Hasina narrated that various strategies have been incorporated in the long-term perspective plan alongside taking the 8th Five Year Plan.

She also pointed out the ongoing mega projects like Padma Bridge, metro rail project, construction of Karnaphuli Tunnel and Rooppur Nuclear Power Plant, and said some of those are expected to be launched this year or early next year.

Besides, the country’s economy will gain further momentum once the construction work on 100 Special Economic Zones and over two dozens of High Tech Parks and IT Villages are completed, she added.

Younger daughter of the Father of the Nation and PM’s younger sister Sheikh Rehana was also present at the press conference from Ganabhaban.