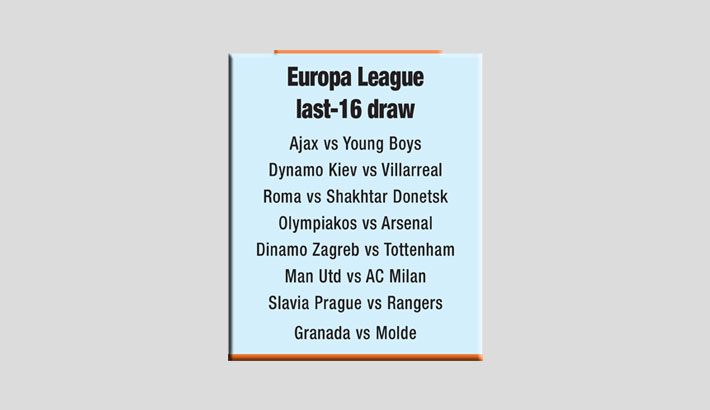 Pierre-Emerick Aubameyang scored twice including a late winner as Arsenal qualified for the last 16 of the Europa League on Thursday with a 3-2 victory over Benfica in Greece, while Manchester United and Rangers cruised through to the next round.

United cemented their place in Friday's draw with a 0-0 draw at home to Real Sociedad, having effectively clinched the tie last week with an emphatic 4-0 win on neutral ground in Italy.

Leicester City, who are behind second-placed United in the Premier League only on goal difference, were knocked out after sliding to a 2-0 loss at home to Czech champions Slavia Prague.

Steven Gerrard's Rangers progressed following their 5-2 win over Belgian side Antwerp at Ibrox, with five different players on target for the Scottish league leaders.

AC Milan squeezed past Red Star Belgrade on away goals after a 1-1 draw in a clash of former European champions at the San Siro.

Franck Kessie's early penalty was enough to book Milan's place in the last 16 despite El Fardou Ben Nabouhane equalising as the tie finished 3-3 over the two legs.

Napoli's dismal run continued as they were knocked out 3-2 on aggregate by Granada despite winning 2-1 in the return fixture in Italy.

Ajax eliminated French Ligue 1 leaders Lille with a 2-1 victory in Amsterdam to complete a 4-2 overall win, while Gerard Moreno netted both goals as Villarreal dumped out Salzburg 4-1 on aggregate.