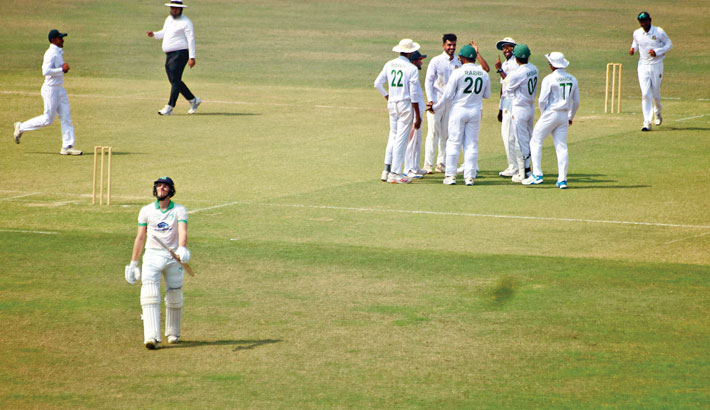 Bangladesh Emerging Team players celebrate a wicket of Ireland Wolves during the opening day of their lone four-day match at the Zahur Ahmed Chowdhury Stadium in Chattogram on Friday. —BCB photo

Left-arm spinner Tanvir Islam’s maiden five-wicket haul in a first-class match put Bangladesh Emerging team in a commendable position against Ireland Wolves on the opening day of the lone four-day match in Chattogram on Friday.

Tanvir claimed 5-55 while Ebadot Hossain and Saif Hasan took two wickets each as Bangladesh team bowled out the touring side for 151 runs in 67 overs in their first innings after Wolves chose to bat first at the Zahur Ahmed Chowdhury Stadium.

Bangladesh team reached 81-1 at stumps of the opening day, still trailing by 70 runs after opener Tanzid Hasan made a quick-fire 41 off 39 balls.

Skipper Saif and Mahmudul Hasan Joy remained not out on 22 and 18 runs respectively.

“The wicket was flat. The balls got spin little bit initially. After that it was a flat wicket,” said Tanvir.

“I think my fitness has been improved. It was not as good as it is now after coming to HP. I couldn’t manage to bowl at same line and length previously but now after improving the fitness, I can do it better,” he added.

First-class debutant Curtis Campher made the highest 39 runs while Lorcan Tucker scored 20 as the pair added 49 runs for the fifth wicket to bring some resistance in their innings.

Skipper Saif removed both the batsmen as the visitors lost the remaining wickets in quick succession to bowl out cheaply in their first innings.

Bangladesh team started positively in their innings before Tanzid was dismissed by Tector after a 50-run opening stand with Saif.

Bangladesh didn’t lose any wicket afterwards as they finished on top after day one in the four-day contest.