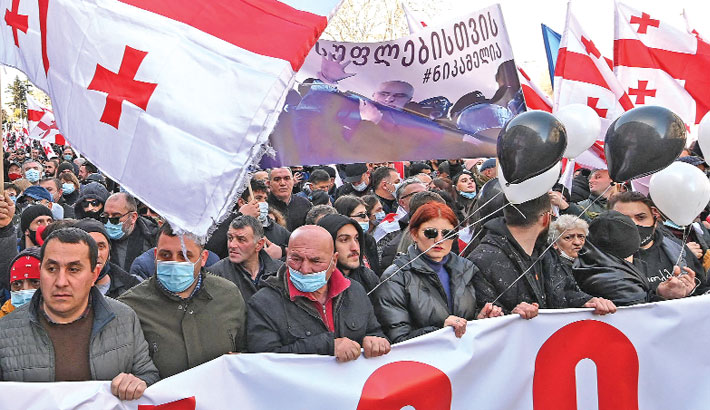 TBILISI: A simmering political crisis in Georgia came to a head this week, with the surprise resignation of the prime minister and the dramatic arrest of an opposition leader in a police raid, reports AFP.

For government critics, this turning point in unrest sparked by disputed elections last year had the hallmark signature of one enigmatic figure towering over the ex-Soviet country’s political landscape.

Reclusive billionaire Bidzina Ivanishvili, who formally resigned from politics this year, lives in a lavish glass-and-steel mansion overlooking the capital Tbilisi, where he keeps a priceless collection of contemporary paintings and a giant aquarium with sharks.

He insists he is no longer a political stakeholder in the country that has weathered revolutions and civil war since it broke from the Soviet Union three decades ago. But many believe otherwise.

“Ivanishvili’s former bodyguard is interior minister. The defence minister and head of secret service are former managers in his bank,” said Salome Samadashvili, a leader of the opposition United National Movement (UNM).

“He is in full control of the government and owns the country like other oligarchs own companies or islands,” the seasoned former diplomat told AFP.

Born into poverty in the village of Chorvila in western Georgia, Ivanishvili made his fortune in Russia during the cutthroat 1990s when oligarchs amassed huge wealth in privatisation deals.

But his Cartu Bank founded in 1996 along with the luxurious Paragraph hotel on the Black Sea are his only businesses in Georgia where he has bought up property and land worth hundreds of millions of dollars.

Ivanishvili, 65, now with a splash of grey in his neatly coiffured hair, cemented his position on the Caucasus country’s political landscape in 2012 when his party Georgian Dream ousted the ruling UMN party.

Having removed the party of then-president and flamboyant reformer Mikheil Saakashvili, Ivanishvili stepped down as prime minister in 2013.

In January, he unexpectedly announced his departure from politics entirely and even removed himself as chairman of the party that he named after a song written by his rapper son.

“I have made the decision to finally retire from politics and fully distance myself from the reins of power,” he wrote at the time in an open letter, where he also declared that his “mission has been accomplished”.

Georgian Dream leaders have since flatly denied claims that he retains a hidden influence over the country’s politics.

But with the government mainly composed of his loyal lieutenants, many believe Ivanishvili is ultimately responsible for the latest dent in Georgia’s reputation as a democracy among former Soviet countries.

“All the key positions in the executive and legislative branches, as well as in the judciary system are held by Ivanishvili’s people,” said Gela Vasadze, an analyst with Georgian Strategic Analysis Centre think tank.

“His grip on power is as strong as it was before his so-called resignation,” he added.

Georgia’s three decades of independence since the Soviet Union’s collapse in 1991 have been marked by a civil war, separatist conflicts, and a series of political upheavals.

The current political crisis was sparked by the elections, which opposition parties said were rigged, leading them to boycott the formation of the new parliament.

Melia, 41, a charismatic politician who united Georgia’s traditionally divided opposition against Georgian Dream, has said his prosecution on “spurious” charges of “organising mass violence” during anti-government protests in 2019 was “Ivanishvili’s whim”.

Samadashvili said that Ivanishvili’s system, where private interests permeate politics and opposition leaders are either in jail or exiled, “is undoing Georgia’s democratic achievements and derails the country from its pro-Western trajectory”.