No respite from horrific road accidents 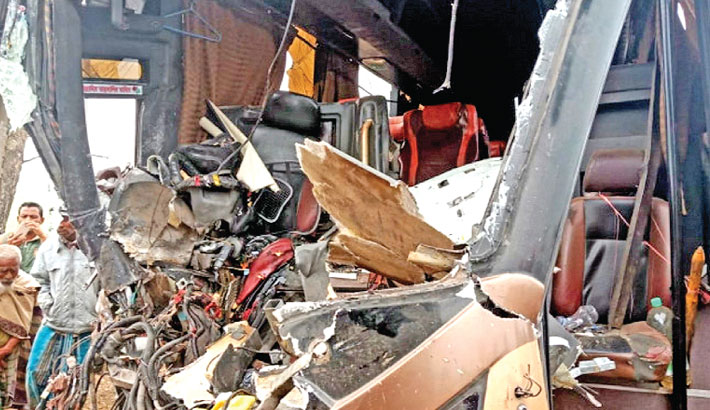 A passenger bus lies mangled after a head-on collision with another bus at Rashidpur on Dhaka-Sylhet highway in South Surma upazila of Sylhet on Friday. Rescuers and local people gather at the site of the accident that left at least eight people dead and 20 others injured. – SUN PHOTO

At least 22 people were killed and many others wounded in separate road accidents in eight districts of the country on Friday.

Of them, eight were killed in Sylhet while six in Bogura, two in Barishal and Mymensingh each and one each died in Habiganj, Sherpur, Jhenaidah and Chuadanga.

In Sylhet, at least eight people were killed as two buses collided on Dhaka-Sylhet highway in South Surma upazila in the morning.

The accident left eight people dead and 20 others injured.

In Bogura, a bus hit a CNG-run auto-rickshaw in front of Majhira Cantonment check-post on the Dhaka-Bogura highway in Shahjahanpur upazila in

the early hours, killing four people, including the three-wheeler driver.

Two of the deceased were identified as Kalidas, 72, and driver Shah Jamal, 34, hailing from the upazila.

Inspector Baniul Anam, in-charge of Sherpur highway police outpost, told the media that the accident took place around 5:30am when the ‘Shawon Paribahan’ bus hit the auto-rickshaw from behind, leaving three people dead on the spot and another person wounded.

The injured died on the way to Shaheed Ziaur Rahman Medical College Hospital, he said, adding that they seized the bus.

Meanwhile, two people were killed after an easy-bike was knocked down by a truck at Tishigari on Bogura-Naogoan highway in Dupchanchia upazila of the district around 2:30pm.

The deceased are easy-bike driver Rasel, 35, and passenger Muktar Hossain, 35.

OC of Dupchanchia Police Station Hasan Ali said the truck driver fled soon after the accident but they seized the truck.

In Barishal, two people were killed when a truck crashed into a motorcycle around 10am near Shaheed Abdur Rab Serniabat Bridge.

The deceased were identified as motorcyclists Sharif Sheikh and Al Amin. The two friends hailing from Bangha of Faridpur were going to Charmonai.

In Mymensingh, a truck smashed into a motorcycle at Domghata in Dhobaura upazila around 10:45am, leaving its two young riders dead.

The deceased are Shahidul Islam Rony, 30, and Zahid Hasan Rasel, 28.

In Habiganj, the driver of an easy-bike named Abdur Rahman Sohag was killed when a bus hit his three-wheeler at Kalimnagar of Shayastaganj of the district in the afternoon.

In Sherpur, a woman was killed on the spot when a goods-laden truck ran her over around 7am on Sherpur-Jamalpur highway near the Circuit House.

The deceased was identified as Amena Parveen, 40. Police seized the truck but its driver and helper fled, said OC Abdullah Al Mamun of Sadar Police Station.

In Jhenaidah, a youth named Shimul Biswas, 40, was killed in a triangular collision among three motorcycles around 4pm at Patbila on Kaliganj-Kotchandpur road in Kaliganj.

In Chuadanga, a passenger of a battery-run van was killed in an accident in front of the Khashkora land office in Alamdanga upazila. The deceased is Shipon Ali, 35.

At least 6,686 people were killed and 8,600 others injured in 4,891 road accidents across the country in 2020, according to a report of Bangladesh Jatri Kalyan Samity.