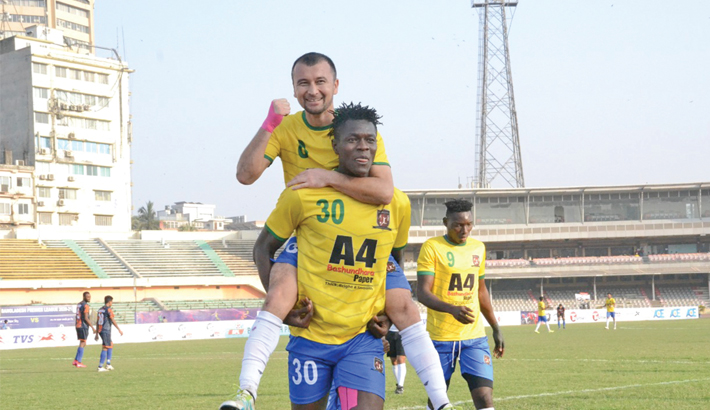 Players of Sheikh Jamal Dhanmondi Club Limited celebrate after scoring a goal during their Bangladesh Premier League football match against Brothers Union at the Bangabandhu National Stadium in the capital on Thursday. – BFF PHOTO

Sheikh Jamal Dhanmondi Club finally got full three points after drawing their previous four matches as they on Thursday beat Brothers Union 3-1 in their 10th match of the ongoing Bangladesh Premier League in the capital.

Sheikh Jamal’s three foreign recruits – Sillah, Pa Omar and Otabek put their names in the score-sheet as they moved to the second spot in the points table at the Bangabandhu National Stadium.

The goals came in the 34th, 59th and 75th minutes for Sheikh Jamal while Brothers Union’s Faisal scored a consolation goal in the 81st minute of the game.

Sheikh Jamal are one of the three teams in the ongoing BPL after table-toppers Bashundhara Kings and Dhaka Abahani Limited who are yet to concede a defeat this session.

Brothers Union, on the other hand, remained at second-last in the 13-team competition with just two points from 10 games.

In the day’s other match at the Birshreshtha Flight Lieutenant Matiur Rahman Stadium in Munshiganj, Bangladesh Police FC beat Arambagh KS 2-1 to register their third win in the competition.

Jamir Uddin and Frederic Pooda scored one each for their side in the 14th and 29th minute respectively before Arambagh’s Nihat Jaman Ucchash scored one in the 72nd minute to bring some excitement to the contest.

Police now have 12 points from 10 games while Arambagh remain at the bottom with just one point to their name after playing 10 matches.