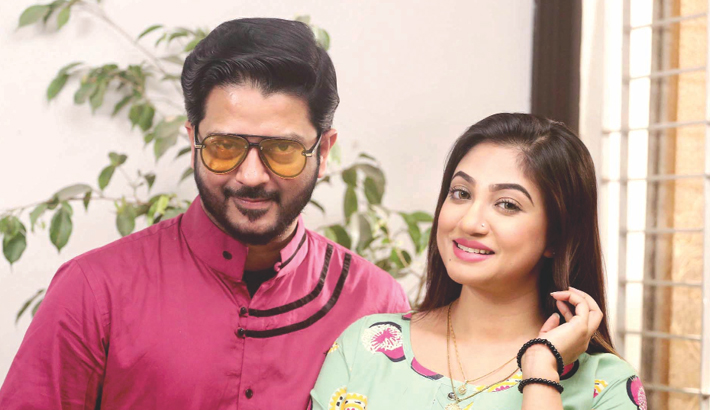 Dhallywood actors Kayes Arju and Achol Akhe started their careers in the film industry in 2007. But, in their 14-year film career, they have never been worked together in a film. Now, the audience will seem them in a film for the first time. The title of the film is ‘Ek Poshla Bristy’, directed by Zafar Al Mamun.

The shooting of the movie began at a shooting house in the capital’s Uttara area on Thursday. In the film, Arju will be seen as Shumon and Achol’s character name is Shumona.

About the movie, Arju said, “The story of ‘Ek Poshla Bristy’ is amazing. This is my first work with Achol. We are trying to portray our characters perfectly. Thanks, Shahin Shumon bhai and Shapla Media to select me for the movie.”

Achol also said, “This is my first work with director Zafar Al Mamun and actor Arju. Thanks to Shapla Media for their initiative. I hope this will be a good project.”

Apart from the film, Arju will be seen in two more movies of Shapla Media. Achol will act another film under this production house.

Achol made her debut in the film industry through ‘Bhool’ which released in 2011. She came into the limelight after acting in the movie ‘Jotil Prem’ with co-actor Bappy Chowdhury in 2013.