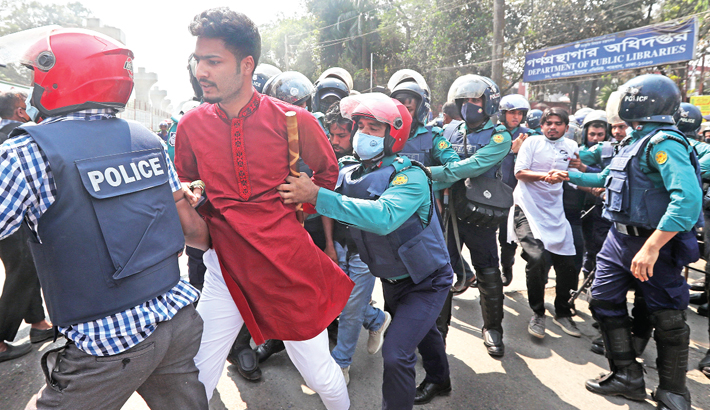 Police pick up some students of National University who try to block the busy Shahbagh intersection in the city on Thursday, protesting against the government decision to postpone examinations. However, the law enforcers later released them. —SUN photo

The National University (NU) on Thursday published a revised schedule for all postponed examinations amid protests by its students.

As per the schedule, all the examinations under the university, which were postponed due to Covid-19, will begin on May 24, said a press release.

Postponed examinations of all courses, including the second-year exam of Degree pass and certificate course of 2019 and final year master’s exam of 2018 will begin from May 24, the release said.

Besides, the first-year admission test process (2020-2021) will begin on June 8. The NU authorities have called upon the students to take preparation accordingly.

Detailed revised schedule of the postponed examinations has been published on the university website -- www.nu.ac.bd.

Earlier, NU announced that all examinations under the university were postponed until further notice which created a furor among students. Some students started demonstration at Shahbagh area on Thursday morning, protesting the move.

Police detained at least 10 protesters but hours later, the Shahbagh police said they have released them.