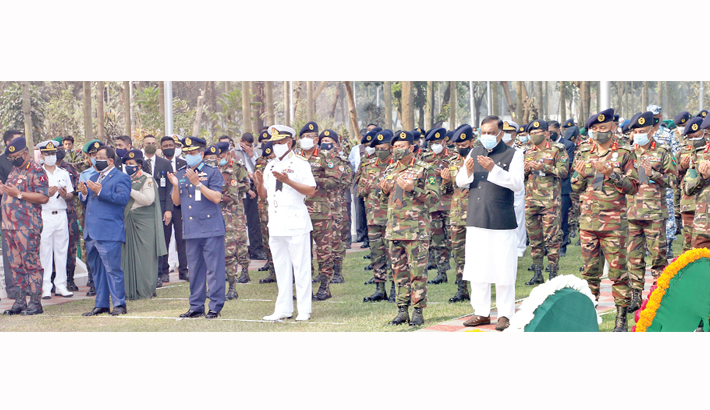 Home Minister Asaduzzaman Khan and the chiefs of three services along with high civil and military officials offer munajat after placing wreaths at the graves of the slain army officers at the Military Graveyard in the capital’s Banani on Thursday, marking the 12th anniversary of Pilkhana carnage. - ISPR photo

The nation mourns the victims of 2009 mutiny in the then Bangladesh Rifles (BDR) now Border Guard Bangladesh (BGB) on Thursday, marking the 12th anniversary of the carnage.

On behalf of President Abdul Hamid and Prime Minister Sheikh Hasina, floral wreaths were placed at the graves of the slain army officers at Banani Military Graveyard at around 9:00am.

They also observed one-minute silence to show respect to the martyrs. Later, army personnel honoured the BDR mutiny victims with a gun salute.

Later, prayers were offered for the forgiveness of the souls of the martyrs.

Relatives of the victims and army officers also paid tributes to the martyrs by placing wreaths at their graves at Banani Military Graveyard. A somber environment descended there as the family members burst into tears.

To mark the day, Milad mahfil and special munajat were also organised in the central mosque of all the cantonments in the presence of army personnel of all levels seeking forgiveness of the souls of the martyrs.

All BGB members wore black-badge and BGB flag was hoisted half-mast at the places where BGB regimental flag is hoisted.

Besides, the senior secretary of the Public Security Division under Ministry of Home Affairs, BGB Director General, invited guests from the Ministry of Home Affairs, relatives of the martyrs, all officers, junior officers, soldiers of other ranks and civil officials working of the BGB headquarters will attend the special prayers and milad mahfils by maintaining social distance and following hygiene rules.

On February 25 and 26, 2009, hundreds of Bangladesh Rifles (now BGB) men rose up in armed revolt at Darbar Hall during the three-day ‘BDR Week’ inside the Pilkhana headquarters and killed 74 people, including 57 deputed army officers.

The mutiny finally ended on February 26 with the surrender of the firearms, ammunition and grenades through negotiation between the government and the BDR rebels. Following the mutiny, the paramilitary force was renamed Border Guard Bangladesh (BGB).