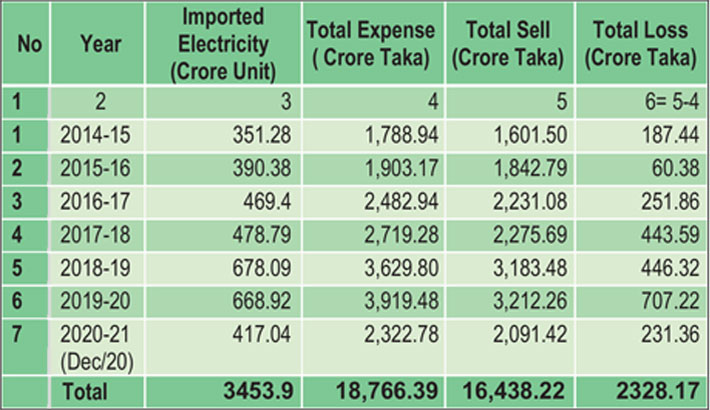 Bangladesh Power Development Board (BPDB) has sought Tk 23.28 billion in subsidy to cover the losses it incurred over the last six and a half years for selling imported electricity at subsidised rates.

From 2014-15 to December of FY 2020-21, BPDB incurred the loss for selling electricity at tariffs lower than the purchase cost from Indian public and private power plants.

During the period, the BPDB purchase 34.54 billion units of electricity at a cost of Tk 188 billion.

PDB incurred a loss of Tk 23.28 billion for selling bulk electricity at subsidised rates, he said.

“Electricity generation cost depends on fuel cost. But the depreciation of Bangladeshi taka and a fall in the demand for electricity amid the corona crisis have increased the cost of electricity,” state-run BPDB said in a separate letter to the Power Division in January this year.

The fixed cost of electricity has increased due to a hike in gas price, the letter reads.

BPDB also imported electricity from India at a higher price despite surplus electricity generation at home due to a sharp fall in demand amid the corona outbreak and winter season.

BPDB has recently received Tk 23.87 billion in subsidy in July-September 2020 to minimise loss incurred in the first quarter of this fiscal.

The BPDB has sought another Tk 14.27 billion from the finance division to manage the loss for the trade of electricity at a lower tariff between October and November 2020.

In its letter, the BPDB also expressed hope that the electricity generation cost will come down when the nuclear and coal-based power plants will come into operation.