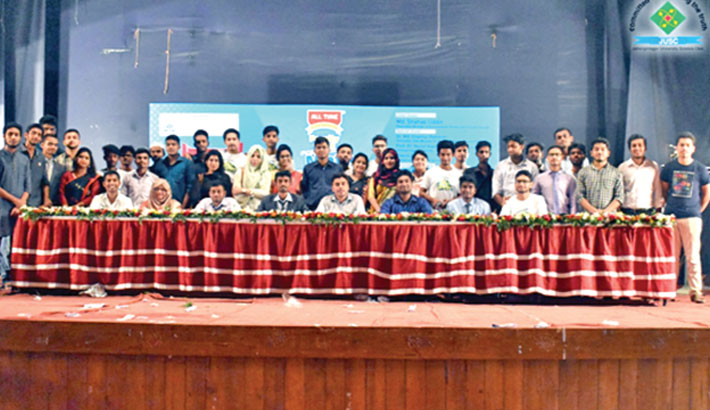 A joyous moment of Jahangirnagar University Science Club (JUSC) members, the backstage craftsmen behind the successful implementation of the three-day '6th National Math Olympiad' organized by the club in 2019

What is the greatest asset of a nation? What is the biggest reservoir of its power? What determines if the nation will move forward or it will continue to crawl? Its natural and mineral resources? Land fertility? Funding? War supplies? No doubt, all of these could be important. However, it seems that more important than all of these is its human resources --- a skilled, educated and disciplined population who are always ready to give their all for the sake of the country and the nation. The future development and progress of a nation largely depends on how its future generation --- the adolescents and youths --- develops.

A visionary nation, therefore, places utmost importance on building its young generation as skilled and well-educated manpower in line with the needs of the future. You may think of the issue on a small scale. When the youths from disadvantaged families work hard to get educated and begin to shine in society, those who were so powerful all around for money and wealth, even a generation ago, seem to have become a shadow beside them. Similarly, if a nation can educate and train its young generation, you may see a magical change in its status within a generation or two. Conversely, when a nation indulges in luxuries and its youth become distracted from work and backward in education, incompetence as well as moral deviations spread, leading to instabilities and chaos in society. As a result, a nation rising to the pinnacle of progress may see it fall to the ground within a generation or two. This is not just the crux of the theory; the history of the world has witnessed many such ups and downs.

Youths are the main asset of any nation. They have intense curiosity, constant restlessness, and eagerness to do something. How you are going to meet these physical and mental needs of the youths will determine which way the talent and energy inherent in them will flow. After childhood, when they reach adolescence and enter youth, a lot of things attract them and want to pull them closer. They have a constant interaction with a vast world outside the family and the classroom. Here they have the opportunity to learn a lot of new things, but there is also a risk of stepping on the wrong path at any moment due to lack of experience and adventurous attitude.

Therefore, adolescents and youths need to be engaged in various creative and constructive activities to meet these psychosomatic needs and to protect them from going astray. This gives them the opportunity to interact with their peers as well as seniors and juniors, and to develop, by working in groups, the working abilities and leadership qualities that prepare them for facing future challenges and, above all, reduces their chances of engaging in anti-social activities. Social and cultural organisations in the neighbourhood and in educational institutions can play an important role in keeping the youth engaged in such activities.

It is all the wonderful discoveries of science in the last few centuries that have played the key role in advancing the human civilisation to the stage it has reached today. The science has revolutionised agriculture and industry. Many of the diseases that have plagued mankind for hundreds of thousands of years are now under human control. The movement of humankind today is not limited to the earth surface only. They have their footsteps everywhere --- no matter it's the huge depth of the oceans or the infinite emptiness of the heavens. However, unfortunate but true, many nations like us are just spectators in this explosion of science and technology. We look like birds of prey, wondering when others will discover something new and we will have a share from the leftovers. In this age of science, if a nation fails to advance in science and technology, the possibility of change in its destiny is far from certain. The question that may come to curious mind is: do we as a nation lack capacity? Is there such a dearth of talent in this huge population of 160-170 million people? That is not supposed to be the case. In fact, we need to change our attitude --- we need to build a generation that will be dedicated and self-sacrificing to the pursuit of science.

Science clubs established in different educational institutions of the country are playing an important role, through various programmes, in making students mindful of science. Jahangirnagar University Science Club (JUSC) has been playing a unique role in this regard. Currently, it is the country's largest campus-based science club and has more than three hundred active members. A 46-member executive body coordinates the club's overall activities. The general members meet once a month and the executive body as needed. Moreover, there is an advisory council with teachers from the Faculty of Science and the Faculty of Biological Sciences to assist them with the necessary advice and guidance. Vice Chancellor of the university is the chief patron, ex-officio, of this organisation. The club has an office in the Teacher-Student Center (TSC) of the university, from where its overall activities are conducted.

Since its inception in 2005, the organisation has been inspiring and motivating students to pursue science through a variety of science-based programmes throughout the year. These programmes include Math Olympiad, Science Festival, Scientific Workshop, Science Tour, Quiz Competition, Scientific Talking etc. The club also has a regular annual publication named Nucleus. It also publishes another occasional magazine called Orbit on contemporary scientific issues. When on the one hand the organisation has received regular guidance and advice from the teachers of the Faculty of Science and the Faculty of Biological Sciences, it on the other hand has established a link with the students from schools, colleges and other universities through programmes like Math Olympiad and Science Festival over the years. Also, every year the organisation is honouring the outstanding people for their contribution to science in this country.

In recognition of all these feats, the organisation was registered with the National Museum of Science and Technology in 2018. Currently, the club is receiving the highest grant, from the Ministry of Science and Technology, among the 157 organisations listed with it. Like every year, The Maths Olympiad, organised by the club, is going to be held in the 1st week of March. Neural Semiconductor Limited, one of the top technology firms in the country, has undertaken the responsibility of sponsoring and conducting Olympiad tests online. It is expected that this time, too, a large number of students from schools and colleges will participate in the Math Olympiad.

The path that Jahangirnagar University Science Club (JUSC) is showing to encourage the young generation of the country in the practice of science is worth following. However, there is a need to regularly review how these activities can be further modernised over time. It may be considered whether the activity of encouraging the youth in the practice of science can be further strengthened by building a network of science clubs established in different parts of the country. Moreover, attempts can be made to establish contact with well-known science clubs abroad. We may hope that, in this way, the activities of JUSC will further accelerate in coming days.

(Tareq Aziz, the incumbent president of Jahangirnagar University Science Club, assisted the author in compiling this article with various facts and figures.)