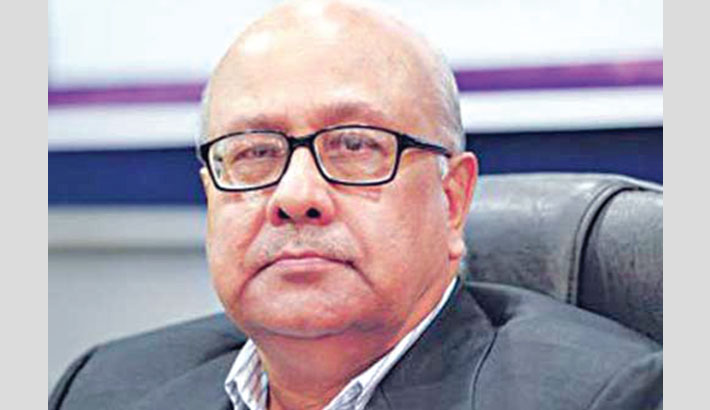 Noted banker and former Deputy Governor of Bangladesh Bank Khondkar Ibrahim Khaled passed away at a hospital in the capital on Wednesday. He was 80.

He breathed his last around 5:45am while undergoing treatment for post-Covid complications at the Intensive Care Unit (ICU) of Bangabandhu Sheikh Mujib Medical University (BSMMU).

The prominent economist left behind wife, a son, a daughter and a host of relatives and well-wishers to mourn his death.

The first namaz-e-janaza for Ibrahim Khaled was held on the premises of Kendriyo Kachi Kachar Mela Bhaban at Segunbagicha at 11am while the second one at Baitul Mukarram National Mosque after Zohr prayers.

He was buried in his family graveyard in Sadar upazila of Gopalganj following his third and final janaza there.

Ibrahim Khaled earlier tested positive for coronavirus and was admitted to Bangladesh Specialized Hospital in the capital on February 1.

He recovered from coronavirus, but his lung was severely affected and he had also been suffering from various aging-related complications.

The noted banker was shifted to the BSMMU on February 18 and put on life support on Monday after his health deteriorated. Consequently, he also suffered a stroke and could not stage a comeback.

In separate condolence messages, they said the country’s people will always remember the contributions of Ibrahim Khaled to the smooth development of Bangladesh’s banking sector.

They prayed for eternal peace of the departed soul and conveyed deep sympathy to the bereaved family members.

Leader of the Opposition in Parliament Rowshan Ershad, Jatiya Party Chairman GM Quader, Bangladesh Bank Governor Fazle Kabir, Bangladesh Economic Association and Economic Reporters’ Forum, among others, also condoled the death. Born in Gopalganj on July 4, 1941, Ibrahim Khaled joined the banking profession in 1963 after obtaining a Master’s degree in Geography from Dhaka University and held an MBA from its Institute of Business Administration. In his six-decade long banking career, he also served as the chairman and managing director of Bangladesh Krishi Bank and managing director of state-owned Sonali Bank Ltd and Agrani Bank Ltd, and Pubali Bank Ltd.

Ibrahim Khaled was an independent director of Pubali Bank till his last day.

A brave voice against all fraudulent activities in the country’s banking sector, Ibrahim Khaled headed the inquiry committee formed by the government to identify the reasons behind the share market fall in 2010 and made several recommendations.

He also worked for children as the director, trustee board member and president of the executive committee of Kendriyo Kachi Kachar Mela.

Ibrahim Khaled was awarded the Khan Bahadur Ahsanullah Gold Medal in 2009 and Khan Bahadur Nawab Ali Chowdhury National Award in 2013 for his outstanding contributions to the banking sector.