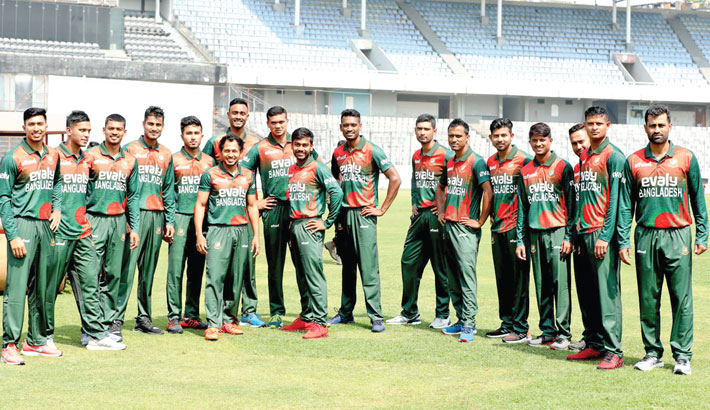 Bangladesh national cricket team players pose for a photo for their upcoming New Zealand tour at the Sher-e-Bangla National Cricket Stadium in the capital on Monday. – BCB PHOTO

Bangladesh national team geared up for taking part in their upcoming series against New Zealand as they completed their last engagements at the Sher-e-Bangla National Stadium on Monday ahead of the tour comprising three ODIs and three T20Is.

All the members of the national team came to the home of cricket to have a photo shoot for their new sponsor Evaly followed by a meeting with the BCB president at his office room which was also attended by the members of the coaching panel headed by Russell Domingo.

The Bangladesh tour of New Zealand earlier was pushed back by seven days due to Covid-19 and the schedule change was caused by ongoing challenges in the current Covid-19 environment.

Due to the need to allow the visiting side's adequate preparation for international commitments as well as to accommodate necessary logistics, Bangladesh team will have a five-day training camp at Queenstown.

The Tigers will have to stay for 14 days at the Christchurch Government Quarantine Center, built by the country's army.

Cricketers from West Indies, Pakistan, and Australia also had to quarantine for 14 days, when visiting New Zealand earlier.

The country of peace, New Zealand, makes no concessions under the rules of isolation and quarantine, as even the neighbouring Australian players have also completed a 14-day quarantine course and went straight to the venue from the Quarantine Center to play the match.

Bangladesh team also has to follow the same rule, while touring the country.

The luxury of a five-star hotel in Christchurch's is off for the Tigers, as they will have to stay in the Quarantine Center this time. Rather, cricketers have to do their chores like the citizens of the developed world.

Bangladesh cricketers are not used to it, at all.

According to the 14-day quarantine guidelines sent by the New Zealand Cricket Board, no one will be seen face to face for seven days of isolation. Food will be left in the box in front of the room door. They will be able to take it home after the distributor leaves. Used towels should be packed outside the door.

Thus, after seven days of isolation, they will have the opportunity to practice the whole process on their own, as there will be no local support staff for seven days of quarantine practice, just like what the West Indies had gone through in their series against the Black Caps.

“I am sure we will be used to it as we had already been inside the bio-bubble for the last two series. Even though we had never done these things but we need to take the challenge nonetheless,” said Taskin Ahmed.

“Even though we have been inside the bio-bubble since the past two series at home, it will still be a challenge for us, as we need to be inside our rooms for a certain number of days and do all the chores by ourselves. We are quite unused to it but I hope we will be able to take the challenge,” he added.