US nears .5m corona deaths as vaccine drive gets momentum 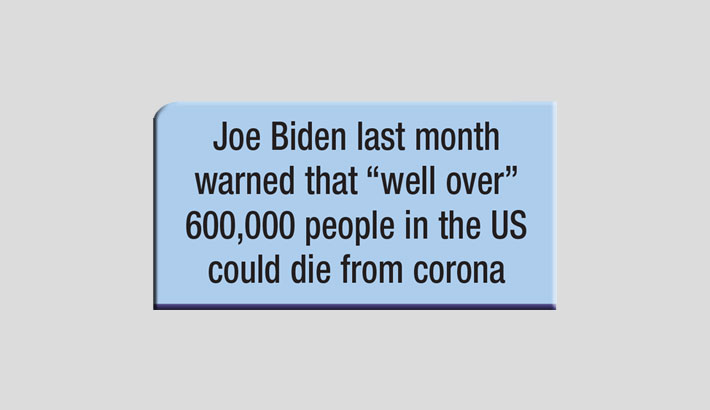 WASHINGTON: The United States stood on the brink of 500,000 Covid-related deaths on Monday, while the vaccination rollout picked up pace globally including with the first shots in Australia, reports AFP.

The catastrophic US toll comes as some signs of hope are emerging in the world’s hardest-hit country, with millions of people now vaccinated and winter’s massive spike in infections dropping.

But deaths are still coming, and President Joe Biden last month warned that “well over” 600,000 people in the US could die from the virus.

“It’s terrible. It is historic. We haven’t seen anything even close to this for well over a hundred years, since the 1918 pandemic of influenza,” Biden’s chief medical advisor Anthony Fauci told NBC’s “Meet The Press.” “It’s something that is stunning when you look at the numbers, almost unbelievable, but it’s true,” Fauci added.

The US toll stood at 498,897 by Monday morning, according to Johns Hopkins University. Globally, the figure was approaching 2.5 million. After America’s first Covid-19 death was announced in February last year, it took about three months to pass the 100,000 mark, during a first wave that hit New York particularly hard.

But as the outbreak surged across the country, the pace of deaths increased, with the toll jumping from 400,000 in just over a month after a spike fueled in part by holiday gatherings.

Fauci noted the number of daily new infections was on a steep decline after peaking in January, but he added normal life may still be some way off.

“I think we’ll have a significant degree of normality... as we get into the fall and the winter, by the end of the year,” Fauci said on CNN’s “State of the Union.”

Meanwhile India, the world’s second worst-hit nation in terms of infections, passed a bleak threshold on Monday by registering its 11 millionth case following a renewed rise in cases.

Fresh restrictions on gatherings came into force in the western state of Maharashtra, home to financial capital Mumbai, which has logged almost 52,000 deaths since the start of the pandemic. The vast nation’s inoculation drive is creeping slowly, and India’s Serum Institute—the world’s biggest vaccine maker—has urged other countries to be “patient,” saying it has been told to prioritise the home market.

In the capital New Delhi, vegetable vendor Radhekrishna Negi spoke for many around the world, telling AFP: “I am fed up of corona.”

According to the US Centers for Disease Control and Prevention (CDC), more than 61 million people have received at least one shot of vaccine in the United States, with some 18 million getting the full two doses.

Biden has made it a priority to get 100 million people vaccinated within the first 100 days of his administration. In Australia, top officials Sunday were among a small group receiving the first vaccinations, a day before the program starts in earnest.