No headway in probe yet 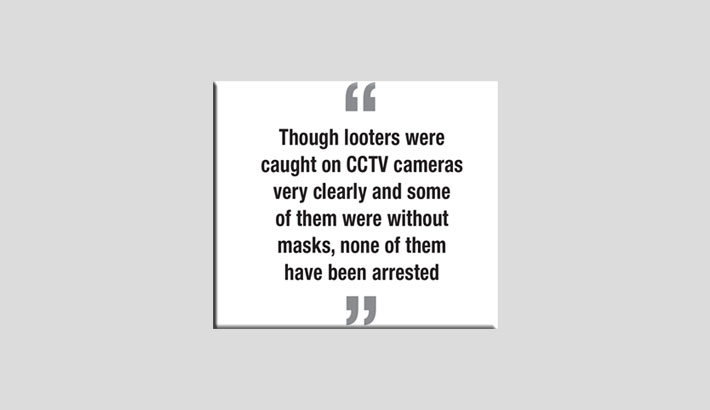 Law enforcers could not make any headway in the investigation into the gruesome theft at a jewellery shop and three clothes shops on the first floor of Rapa Plaza in the capital’s Dhanmondi despite the fact that the incidents of looting were caught on CCTV cameras.

On February 7, a group of miscreants stole about 200 bhories (2.33 kg) of gold from Rajlaxmi Jewllers and a large sum of money from the three clothing stores – Munson Rain, Vogue and Gentle Park.

Mohadeb Karmaker, owner of Rajlaxmi Jewllers, told the Daily Sun on Saturday that he is disheartened as criminals could not be arrested yet.

“I can’t think of anything. Police, CID, PBI, DB and RAB – everyone are saying that they are looking into the matter,” he said.

Though looters were caught on CCTV cameras very clearly and some of them were without masks, none of them have been held, he said.

Mohadeb further said that manager of the mall Saifur Rahman, who is entrusted with the task of maintaining security, should be held responsible for the incidents.

When contacted, Saifur Rahman said that security officials locked up the entire market after trading hours, but the criminals got into the mall by cutting a grill.

Sub-Inspector of Dhanmondi Police Station Mohammad Jahir, who is investigating the incident, told the Daily Sun that they could not make any progress worth mentioning.

“Side by side with me, Rapid Action Battalion (RAB), Criminal Investigation Department (CID), Police Bureau of Investigation (PBI) and Detective Branch (DB) are also probing it.

“The CID took fingerprints of all the employees and owners of the shops. The DB police arrested a certain Maudud on suspicion of the incident, but yielded nothing.

“Maudud, who is a criminal, was taken before the court. He said that he was not involved in the crime.

“The thugs who made off with the valuables and cash are very cleavers. They didn’t use mobile phones before and after the incident. We have tried to receive help with technology but failed. Now, we will have to go manually.”

The official further said that the CCTV footage has been sent to various sections of law enforcement agencies.