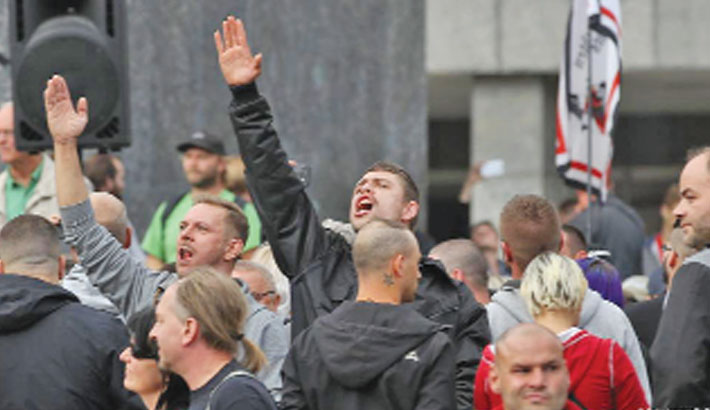 A top official at a Polish research institute charged with investigating Nazi and communist-era crimes resigned Monday after photos emerged of him performing Nazi salutes in public a few years ago, reports AFP.

Tomasz Greniuch had been named earlier this month as director of the Wroclaw branch in southern Poland of the Institute of National Remembrance, known by its Polish acronym as IPN. Shortly after his nomination on February 9, photos began to emerge of Greniuch performing Nazi salutes at far-right rallies several years ago.

IPN director Jaroslaw Szarek said in a statement that it was no longer possible for Greniuch “to continue to perform this function” and that he had accepted his resignation.

IPN was set up in 1999 to investigate and prosecute Nazi and communist-era crimes in Poland.

There was immediate criticism of IPN’s decision to nominate Greniuch, both in Poland and internationally.

“We were surprised to learn that the new director of the IPN Branch in Wroclaw, Tomasz Greniuch, sees nothing wrong with raising his hand in a Nazi salute,” the Israeli embassy said on Twitter earlier.

“In Poland, a country that suffered so much under Nazi occupation, there should be no place for the use of Nazi symbols,” it said, inviting Greniuch to visit Auschwitz to learn about “the dangers of Nazi ideology”.

But IPN had defended the nomination, with Szarek saying that Greniuch had “apologised” for his Nazi salutes and that this was “behaviour from his youth”.

In a statement, IPN had quoted Greniuch saying: “I have never been a Nazi. I apologise once again for the irresponsible gesture from several years ago and I consider it a mistake.”

Poland’s nationalist government has been accused in the past of politicising the IPN’s work, including a campaign against memorialising communist-era figures who fought against Nazism.

Polish official attitudes to the country’s troubled past have been in the spotlight already this month.

A Warsaw court on February 9 ordered two leading Holocaust historians to apologise to the descendant of a Polish village mayor they had referred to as betraying some Jews during World War II.

The defamation trial was widely condemned internationally and interpreted as an attempt to limit academic freedoms on researching a particularly emotionally charged period in Polish history.