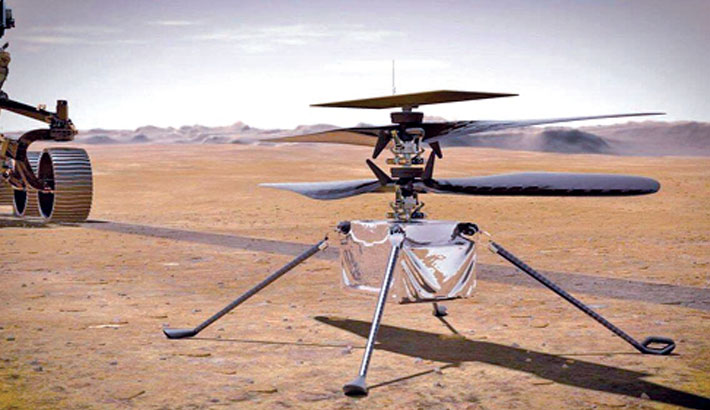 Mission controllers at NASA have received the first status report from the Ingenuity Helicopter, which was strapped to the underbelly of the Perseverance rover that touched down on Mars earlier this week.

According to the agency, both the helicopter and its base station are operating “as expected”. If things go as planned, Ingenuity, a 1.8 kilogram rotorcraft, will become the first helicopter to fly on another planet.

“There are two big-ticket items we are looking for in the data: the state of charge of Ingenuity’s batteries as well as confirmation the base station is operating as designed, commanding heaters to turn off and on to keep the helicopter’s electronics within an expected range,” said Tim Canham, Ingenuity Mars Helicopter operations lead at NASA’s Jet Propulsion Laboratory in Southern California.

“Both appear to be working great. With this positive report, we will move forward with tomorrow’s charge of the helicopter’s batteries.” The helicopter will remain attached to the rover for 30 to 60 days from the time of touch down.

Unlike the Perseverance rover, the Ingenuity Mars helicopter is not carrying any science equipment onboard. Instead, its primary objective is to check whether flight is possible in Mars’ extremely thin atmosphere. The helicopter was able to send a status update to NASA’s Mars Reconnaissance Orbiter, which relays messages between Mars and Earth and has been orbiting the red planet since 2006.

“The downlink, which arrived..via a connection through the Mars Reconnaissance Orbiter, indicates that both the helicopter…and its base station…are operating as expected,” NASA said in a statement.

Presently, the helicopter is receiving recharges from the rover’s power supply. But once it is deployed on the surface of the Red Planet, its batteries will be charged solely by its own solar panel. If Ingenuity succeeds in hovering during its first flight, “over 90% of the project’s goals will have been achieved.”

“If the rotorcraft lands successfully and remains operable, up to four more flights could be attempted, each one building on the success of the last,” NASA said in a statement.

On Thursday, NASA’s Perseverance rover make a historic landing on Mars after seven months in space. The robotic vehicle covered over 472 million km before entering the Martian atmosphere at 12,000 miles per hour (19,000 km per hour) to begin its approach to touchdown on the planet’s surface.

On Friday, NASA released a number of stunning images of the surface of the Red Planet taken by the Perseverance rover. After it touched down near an ancient river delta in the early hours of Thursday, the rover will now search for traces of ancient life and will gather the most vital rock samples for a possible return to Earth.