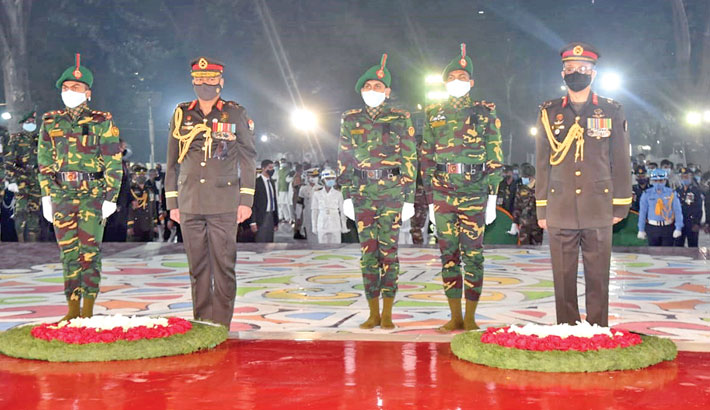 The nation is paying  glowing tribute to the martyrs of the historic 1952 Language Movement today for their supreme sacrifices to establish Bangla as mother language.

the cause of establishing Bangla as a state language of Pakistan.

Usually, the President and the Prime Minister lead the nation in paying homage to the Language Movement heroes by placing wreaths at the Shaheed Minar at one minute past zero hours.

But, they were not present in person this year due to Covid-19 pandemic.

Commoners and supporters of different political and socio-cultural organisations stood in queues in front of the Central Shaheed Minar before the clock struck 12:00am.

Afterwards, different political and socio-cultural outfits and individuals paid homage to the martyrs with flowers.

Street paintings, festoons, banners, buntings and placards with popular inscriptions on the language movement featured the areas, adding to the solemnity of the event.

The national flag is hoisted at half-mast and black flags flew atop government, autonomous and private offices across the country.

On February 21, 1952, the Pakistani police fired at a peaceful procession in Dhaka and brutally killed many people, mostly students, including Salam, Barkat, Rafiq, Jabbar and Shafiur.

The day is being observed as the International Mother Language Day in 193 countries across the globe following United Nations Educational, Scientific and Cultural Organization (Unesco) recognition of Ekushey February on November 17 in 1999.

Back in 1952, the autocratic government imposed Urdu, the language of less than 20 percent people, as the only official language of Pakistan.

But, the students and people of East Pakistan rose in revolt against the then Pakistan government’s refusal to recognise Bangla, the language of 56 percent people of Pakistan, as one of the state languages.

In the face of strong opposition in 1956, the government was compelled to make Bangla, alongside Urdu, state language of Pakistan.

In his message, the President laid special emphasize on raising global voice for protecting the language and culture of all ethnic groups, including development of respective mother tongue and culture.

“Many languages in the world are now at the risk of extinction. The extinction of a language means disappearance of a culture, a nation and a civilization from the face of the earth,” he said.

The head of the state extended his warm congratulations and sincere felicitations to the people and ethnic groups of different languages of the world along with Bengali -speaking people.

“It is a unique celebration in protecting mother tongue as well as own culture and heritage,” he said.

Prime Minister Sheikh Hasina extended her sincere greetings to the people of all languages and cultures of the world including Bangla on the occasion of Shaheed Day and International Mother Language Day 2021.

“The UNESCO has been celebrating this day with due dignity since 2000 along with Bangladesh. Like every year, they have set a theme for this day- ‘Fostering multilingualism for inclusion in education and society’, which I think is very timely,” she said in her message on the eve of the day.

Noting that the importance of the language movement in the history of the Bangali liberation struggle is immense, Sheikh Hasina said, “Through this movement, the foundation for the inception of a non-communal, democratic, language-based nation/state system was laid”.

This day in 1952, Abul Barkat, Abdul Jabbar, Abdus Salam, Rafiquddin Ahmad, Shafiur Rahman and many others sacrificed their lives to protect the dignity of “our mother language Bangla”, she said, adding, “Today, I pay my deep tributes to the memory of the martyrs of all languages, including Bangla”.

The premier remembered with the utmost respect all the language hero, including the greatest Bangali of all time Father of the Nation Bangabandhu Sheikh Mujibur Rahman, who led the struggle for the dignity of the Bangla language, whose visionary historical decisions and supreme sacrifices have saved the existence of our mother land and people.

The turbulent days of the language movement in the glorious historical records of the Bangali from 1947 to 1952 have been serving as a source of inspiration in “our national life” from time and again, the head of the government observed.

The party will organise a discussion at its central office on Bangabandhu Avenue in the capital at 4:00pm tomorrow with its President and Prime Minister Sheikh Hasina in the chair.

Like previous years, Dhaka University authorities organised the programmes at the Central Shaheed Minar in coordination with other relevant agencies.

Security has been beefed up in and around the Central Shaheed Minar with deployment of police and RAB personnel to ensure security at key points in the capital.