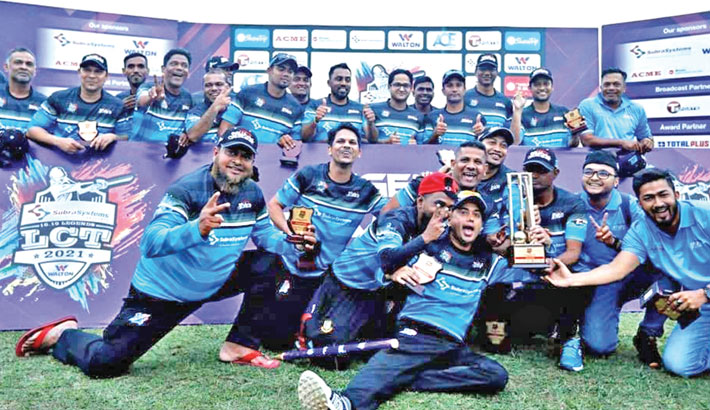 Acme Strikers players celebrate with the trophy of LCT 10.10 at the Sheikh Kamal International Stadium in Cox’s Bazar on Saturday. — SUN PHOTO

The CWAB President Naimur Rahman and General Secretary Debabrata Paul received the dummy donation check from the Chief Executive and Managing Director of ACE, Ishtiaq Sadek and the founder of Crickball, Baki Billah Himel at the Sheikh Kamal International Stadium in Cox’s Bazar on Saturday.

“Crickball always wants to be associated with players' welfare programs as they are considering this event not only for entertainment but also to ensure that cricketers can be benefited from it,” Sadek told reporters.

Khaled Mashud-led Acme Strikers clinched the trophy of LCT 10.10 after they defeated Expo Raiders by 30 runs in the final of the competition.

Ehsansul Haque top-scored 44 runs as Acme Strikers made 104-8 before they restricted Expo Raiders for 74-8 in their stipulated overs. Mohammad Rafique took five wickets for the winners in the final and he bagged the man of the final and the best player in the tournament awards.