Kings edge past Saif in a cliffhanger 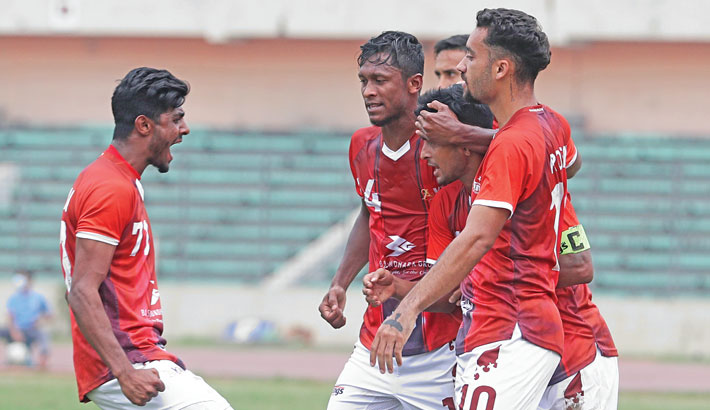 Bashundhara Kings players celebrate after scoring a goal during their Bangladesh Premier League football match against Saif Sporting Club at the Bangabandhu National Stadium in the capital on Saturday. — reaz ahmed sumon

Saif SC got a chance to equal the margin when Kings defender Bishwanath Ghosh wrongfully tackled Nigerian midfielder John Okoli inside the box in the 83rd minute.

But Zico made a brilliant save of Nigerian forward Kenneth Ikechukwu Ngwoke’s shot in the 84th minute to give his side their ninth win in the competition.

Earlier, Kings forward Tawhidul Alam Sabuz and Brazilian forward Robson Azevedo Da Silva Robinho netted one each as they came from one goal behind after Okoli scored one for Saif. All three goals came in the first half.

Kings earlier beat Saif SC by 1-0 goal in the final of season’s curtain-raiser Federation Cup at the same venue in January.

Kings now have earned 28 points while Saif SC remained with the previous 13 points.

Kings received the first blow after Okoli took a 1-0 lead for Saif in the 18th minute as the midfielder sent the ball home with a right-footer from inside the box beating Kings defender Yeasin Khan and goalkeeper Zico.

Kings took a very short time to reply as in the 33rd minute, Sabuz buried the ball with a header from the goalmouth melee in the second attempt while Saif goalkeeper Saiful Islam rebounded a grounder by Brazilian midfielder Jonathan da Silveira Fernandes Reis (1-1).

Robson Robinho made it 2-1 for Kings as he stunned Saif by an outstanding goal with a long-range right-footer from 40-yard in the 37th minute (2-1).

Both the teams created chances in the second half but could not convert the attempts into a goal as Kings extended their dominance and took a handsome lead in the points table.