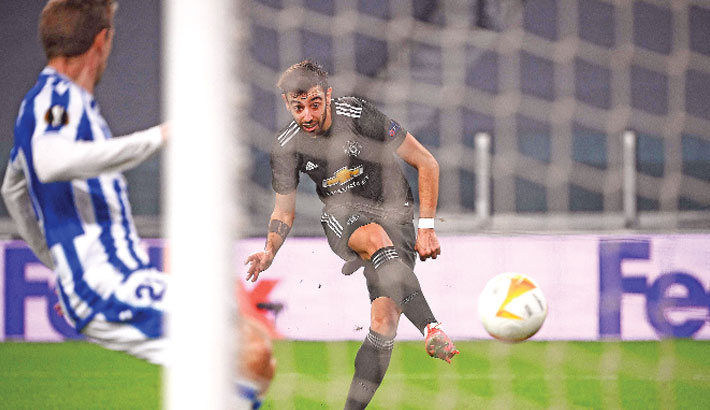 Bruno Fernandes scored twice as Manchester United romped to a 4-0 victory over Real Sociedad in their Europa League last-32 first leg on Thursday, while Gareth Bale impressed for Tottenham in a 4-1 thrashing of Austrian side Wolfsberg.

Ole Gunnar Solskjaer's United are all but into the last 16, with four 'away' goals to take into the return game in a week's time, after the first leg was played in Turin due to coronavirus travel restrictions.

The Premier League outfit grabbed the lead in the 27th minute when Fernandes pounced on a mix-up while Solskjaer's men doubled their advantage 12 minutes into the second period as Fernandes stroked home his 21st goal of the season in all competitions. United continued to play at a pace Sociedad could not deal with and Rashford finally got his goal in the 65th minute before the tie was surely put to bed in the final minute of normal time as James raced clear and fired into the bottom corner.

Bale notched his first Tottenham assist since April 2013 to tee up Son Heung-min for the opening goal in Budapest against Wolfsberg, before drilling in the second before the half-hour mark.

AC Milan, who have not reached the quarter-finals of any European competition since the 2011-12 Champions League, had to settle for a 2-2 draw at Red Star Belgrade.

Leicester, sitting third in the Premier League, were held to a goalless draw at Slavia Prague, but there was plenty of excitement elsewhere.

Patrik Schick scored twice as Bayer Leverkusen fought back from three goals down only to lose 4-3 to Young Boys in Bern, while Olympiakos beat PSV Eindhoven 4-2 in Piraeus.  Dinamo Zagreb edged out Krasnodar 3-2 in Russia and Edin Dzeko's early goal helped Roma to a 2-0 win at 10-man Braga.