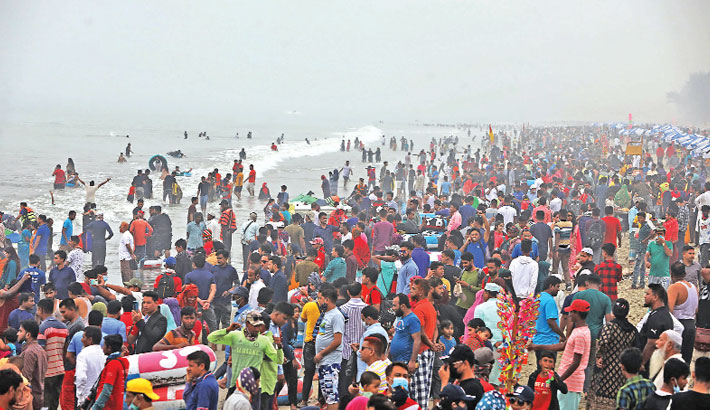 The holidaymakers are now thronging different tourist spots to get a respite from their hectic daily life using two-day weekly holidays added with the government holiday on February 21.

As they got a vacation, the holidaymakers are utilising the time properly and flocking to various destinations including Cox’s Bazar, St Martin’s Island, Rangamati, Bandarban, Kuakata, Sundarbans, Sylhet and other tourist attractions of the country. Hundreds of thousands of holidaymakers already have reached their desired destinations and more will join them during the holidays.

Cox’s Bazar has witnessed the biggest number of holidaymakers since the tourism-related sites were officially reopened amid coronavirus pandemic.

All the key tourist points of the longest unbroken beach of the world including Sugandha, Laboni, Inani and Kolatoli Point are flooded with the tourists.

Lutfunnahar, a holidaymaker who was roaming around at the beach along with her family members, said, “I do a private job and don’t get much time to make a family tour usually. Capitalising this vacation, I have come here with five of my family members. We all are enjoying.”

According to Cox’s Bazar Hotel-Guest House Owners’ Association, there are more than 450 hotels, motels, resorts and cottages in Cox’s Bazar. Usually, the number of tourists from home and abroad in Cox’s Bazar hovers around 30,000 at a time. On weekends, the number increases to 100,000.

“The coastal city already has received more than half a million tourists during this holidays,” said General Secretary of Cox’s Bazar Hotel, Motel, Guesthouse and Cottage Owners Association Abul Kashem Sikdar, adding that, “We are expecting to receive a total of one million tourists by Sunday.”

He also said that the rooms in the hotels, motels, guesthouses and cottages in the city are already booked.

“Many tourists are asking for rooms upon their arrivals but we are failing to meet their demand,” he said.

“We are requesting the tourists to maintain social distancing and wear masks,” he said.

Bandarban, another favourite site of tourists, also welcomed a large number of holidaymakers during the ongoing vacation.

The hill city’s most attractive tourist destinations like Meghla, Nilachal, Nilgiri, Chimbuk and Shoilopropat are full of vacationers.

Bandarban’s tourist car driver Md Jamal said, “We couldn’t drive cars for months due to the government ban and low number of tourists. But a huge number of people have come here to spend three-day holidays. We are taking them to different sites and earning money.”

Owner of the Greenland Hotel in Bandarban Md Mohiuddin said, “Many tourists have come in the last couple of days. Most of our hotel rooms are already booked. We are ready to serve the holidaymakers.”

According to Bandarban Hotel-Motel Owners’ Association President Amol Kanti Dash, there are around 60 hotels and motels and 200 tourist vehicles in the district and all of them are busy with the holidaymakers.

Bandarban’s Superintendent of Police (SP) Zerin Akter said the district has witnessed increase in the number of holidaymakers during the vacation.

“We are working round the clock to ensure safety and security of our local and foreign tourists,” she said.