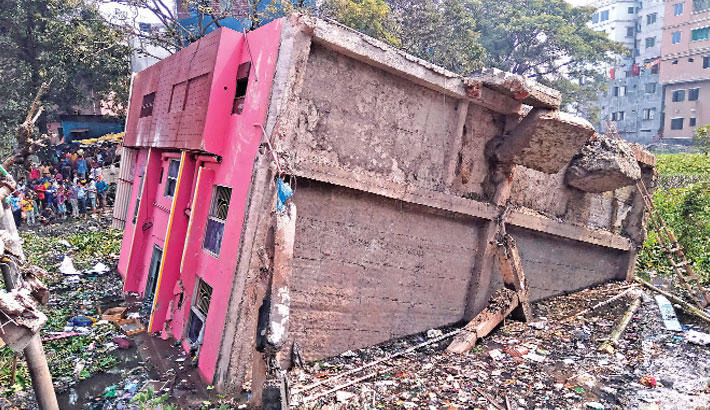 A three-storey building collapses on a water body at Charail in Keraniganj on the outskirts of the capital on Friday. Seven people were rescued from inside the collapsed building. —MD NASIR UDDIN

A three-storey residential building collapsed on an adjacent water body in Keraniganj on Friday, leaving at least seven residents injured.

“The building constructed on the bank of a water body in Madya Charail area suddenly collapsed around 8:15am,” said Lima Khanam, duty officer at the Fire Service and Civil Defence Headquarters.

On information, six units of firefighters rushed to the spot and started a rescue operation.

Seven people were rescued from inside the collapsed building. Two of them were sent to hospital while others received first aid.

Police said a tin-roofed floor was constructed on the second floor of the building near the Purbacharail playground.

However, it was not clear whether the construction work was carried out in accordance with the law and with the approval of the authorities concerned.

Firefighters were searching the building to find whether anyone else remained trapped inside.

Meanwhile, five other buildings on the bank of the water body -- all of which were likely built without any foundation -- were being vacated.

Utility service connections with the buildings were cut off.