English used in most signboards, billboards 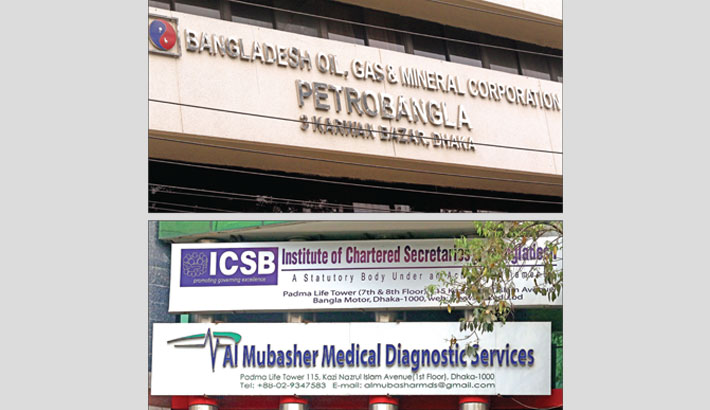 Use of English in signboards and nameplates still continues in the capital despite the High Court order that makes the use of Bangla compulsory in signboards. Even a government organisation is indifferent to executing the HC order. – SUN PHOTO

Though over seven years have elapsed since the High Court order making the use of Bangla in signboards, hoardings, banners and nameplates mandatory, the mother tongue still remained ignored in outdoor advertisement tools.

English language has dominance over Bangla in the advertisement boards as well as nameplates in the capital due to negligence of the authorities concerned, say experts.

They said the authorities are indifferent to executing the HC directive to ensure the use of Bangla in advertisements.

Dhaka North City Corporation (DNCC) and Dhaka South City Corporation (DSCC) conduct mobile court drives only ahead of the International Mother Language Day, which is observed on February 21, to remove signboards written in the foreign language but they remain oblivious to the matter throughout the rest of the year, the experts said.

Officials of both the city corporations, however, said they will take a tougher stance to stop the use of English and ensure that Bangla is used for outdoor advertisements.

On February 2, 2014, the High Court asked the government to introduce Bangla in all public, private and autonomous offices.

It had also issued a rule asking the government to explain as to why it shall not be directed to take immediate steps for ensuring the use of Bangla everywhere.

In its order, the court had said the names of all offices and mass media have to be written in Bangla. The use of Bangla in signboards, billboards, banners and number plates of motor vehicles was also made mandatory.

DNCC and DSCC officials said they stress while issuing trade licences that traders write their signboards in Bangla.

Prof Dr Milton Biswas of Bangla department at Jagannath University said the laxity in monitoring by the city corporation authorities was responsible for not ensuring the use of Bangla in the advertisement tools. “It’s the failure of our city corporation authorities to ensure the use of Bangla in signboards and billboards,” he said, underscoring the need for strict monitoring round the year to accomplish the job.

“Due to the globalisation, every sphere of our life is impacted upon by English language. It’s not wrong to use English. However, we’ll have to ensure the use of Bangla in compliance with the High Court order to show respect to our mother tongue,” he said.

Meanwhile, the DNCC on Monday conducted a mobile court drive in Rampura area to remove signboards written in English.

Asked, DNCC Chief Revenue Officer Abdul Hamid Mia claimed that they conduct the drive throughout the year. “We conduct the drive to remove signboards written in English round the year but strengthen it ahead of the International Mother Language Day.”

He also said they mention the HC order on trade licences in bold letters but traders do not follow the directive.

Hamid said they were working to raise awareness among the traders to write signboards in Bangla.

At least five DNCC executive magistrates conducted drives in Rampura and Banani areas in the capital and removed name plaques, banners and billboards written in the foreign language. They also fined some traders for not using Bangla for writing signboards.

DSCC Chief Executive Officer ABM Amin Ullah Nuri said they will issue a circular urging all businesses to ensure the use of Bangla in signboards, banners, billboards and other advertisement tools by February 28. “We’ll issue a circular in newspapers tomorrow (Friday). In the circular, we’ll urge all to remove the English advertisements by February 28. We’ll go for legal action after the deadline.”