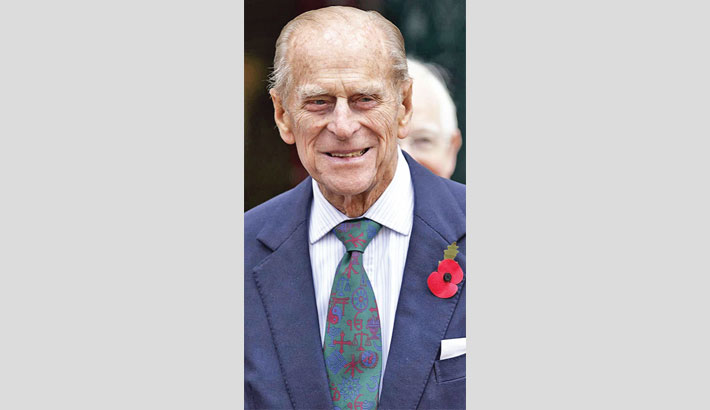 LONDON: Britain’s Prince Philip, the husband of Queen Elizabeth II, was spending a second night in a London hospital, with sources saying it was not due to coronavirus symptoms.

The 99-year-old was said to be “in good spirits” in the private King Edward VII Hospital in Marylebone, where the palace said he was taken on Tuesday evening after feeling unwell.

The Duke of Edinburgh, as he is formally known, “is expected to remain in hospital for a few days of observation and rest”, a statement from Buckingham palace said Wednesday.

Sources told AFP he was not taken in by ambulance and had felt well enough to walk into the hospital. Police officers stood outside the hospital in central London.

Prime Minister Boris Johnson’s office said he had sent his “best wishes to the Duke of Edinburgh as he undergoes a few days of rest in hospital”.

The royal family continued their duties on Wednesday, with the Queen speaking to the Royal Navy Admiral Tony Radakin from Windsor Palace, while Prince Charles and the Duchess of Cornwall visited a hospital in Birmingham.

The prince and the queen, 94, have been maintaining social distancing rules at Windsor Castle, because their age puts them at heightened risk from Covid-19.

The couple received their first vaccinations in January, the palace said in a rare public comment on the private health matters of the royal couple at the time.

Prince Philip retired from public duties in 2017 at the age of 96 following a two-night hospitalisation for an infection. He then had a hip operation in 2018.

In January 2019, he emerged unscathed after his vehicle was involved in a traffic accident that injured two people near the monarch’s Sandringham estate in eastern England.

Philip spent four nights at King Edward Hospital in December 2019, where he was treated for what was described as a “pre-existing condition” and was discharged on Christmas Eve that year.

During the pandemic he has made few public or private appearances.

He attended the wedding ceremony of his granddaughter Princess Beatrice last July, shortly before celebrating his 73rd wedding anniversary.

The latest hospitalisation renewed concerns about Philip’s health ahead of his 100th birthday in June this year.

Philip, the longest-serving consort in British history, was born on the island of Corfu with Danish and Greek royal titles.

When he was 18-months-old his uncle, King Constantine of Greece, was forced to abdicate and Philip fled the country with his parents and four sisters, initially settling in France.

Philip had been formally introduced to Princess Elizabeth, the future queen, in July 1939 and they kept in touch during the war, meeting on a number of occasions. The pair married in Westminster Abbey in London in 1947.

The couple celebrated their platinum wedding in November 2017 at Windsor, with Philip a constant presence at the side of the monarch, who has referred to him as her “strength and stay”.

He shelved his personal ambitions to support his wife, sharing her sense of duty and tradition and has put his energy behind numerous charities including the World Wildlife Fund For Nature and the Duke of Edinburgh Award.

Yet his public appearances caused offence at times. In a 1986 visit to China, he reportedly told students from Edinburgh University: “If you stay here much longer, you’ll all be slitty-eyed.”

While the queen has reduced her public engagements in recent years, her son and heir, Prince Charles, has taken an increasingly leading role alongside his eldest son Prince William and wife Kate.

Most recently, the Prince of Wales and Duchess of Cornwall visited the Queen Elizabeth Hospital in Birmingham and spoke to patients who—like the couple—have also been vaccinated.

“I didn’t feel anything,” Press Association reporting Camilla telling staff after her jab.

The family have tried to galvanise British morale during the pandemic, which has caused more than 118,000 deaths in the country.