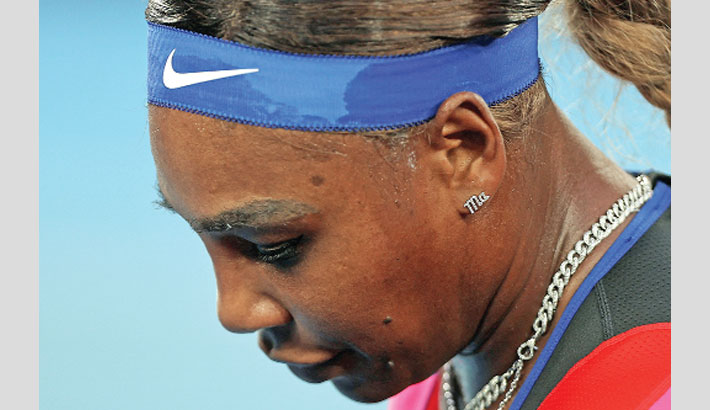 Fans returned after a five-day coronavirus lockdown in time to see an emotional exit from Williams, Jennifer Brady's win over Karolina Muchova and top-ranked Djokovic preserving his perfect semi-final record at Karatsev's expense.

Triple major-winner Osaka, 23, again proved Williams's nemesis with a one-sided 6-3, 6-4 win which heightened questions about whether the American, 39, will ever match Margaret Court's all-time record for Slam singles titles.

Williams put her hand on her heart as she acknowledged a standing ovation on Rod Laver Arena, and later walked out of her post-match press conference in tears, saying: "I'm done."

The returning spectators also witnessed the end of 114th-ranked Karatsev's astonishing campaign, when he became the first man in the Open era to reach a Grand Slam semi-final on debut.

Karatsev knocked out three seeds to reach the last four but he was no match for Djokovic, the record eight-time Melbourne champion who has never lost a semi or final on his favourite court.

"This is the best I've felt in the entire tournament," said the Serb, who has been carrying an abdomen injury since the third round, after his 6-3, 6-4, 6-2 win.

"I could swing through the ball. No pain. The best match so far."

Brady versus Muchova was a far more competitive affair as the American needed five match points before subduing the Czech 25th seed in three sets.

Brady eventually prevailed 6-4, 3-6, 6-4 in 1hr 55min to reach her debut major final against the formidable Osaka.