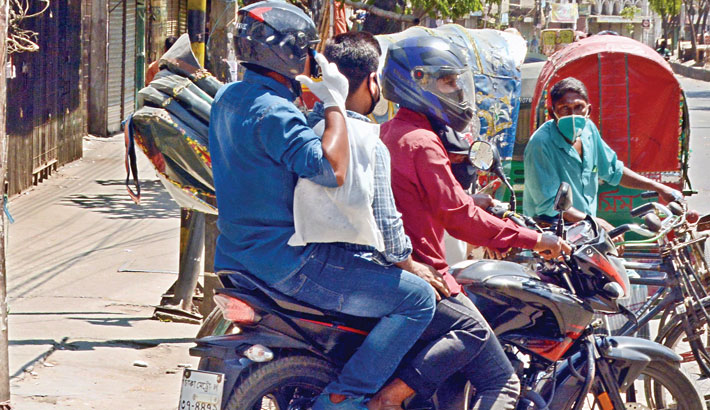 Reckless driving of motorcycles has created a traffic chaos on roads in the capital and many other parts of the country, resulting in a rise in traffic accidents and fatalities.

Police said teenagers especially drive motorcycles recklessly on roads. Most of them are unskilled and do not have driving licences.

Motorcycle driving without helmets and triple riding are a common scenario of teenaged motorcyclists.

Because of their dangerous driving, many motorcyclists fall victim to fatal road accidents every day.

Motorcycle accident also often takes place in the capital due to reckless driving amid a traffic jam.

The scenario is similar outside the capital. At least seven motorcyclists were killed on Thursday in separate road accidents in Chapainawabganj, Gaibandha and Mymensingh.

Pedestrians also become victims of the reckless driving of motorcycles. Killing and injuring of passengers and passersby on roads and highways are a regular phenomenon.

According to the Road Safety Foundation (RSF), at least 484 people were killed and 673 injured in 427 road accidents across the country in January this year.

The accident rate has increased to 25.58 per cent and fatalities to 8.76 per cent, compared to the same period of last year.

Indiscriminate road crossing by pedestrians and motor vehicles, mostly motorbikes, cause frequent road accidents in the capital and on its outskirts.

Traffic rules violation by pedestrians and transport workers are a common phenomenon on different roads.

Road dividers have been made on different roads and highways to avert road accidents, but, many pedestrians and transport workers usually break the traffic rules through unauthorised crossing busy roads.

Many transport workers are also seen taking illegal U-turn on different busy roads and highways indiscriminately, leading to frequent road accidents and a loss of many lives.

The police officer said motorcyclists are the regular violators of traffic rules. Cases are filed against motorbikes for various reasons, including having no valid documents and driving licences, riding on the footpath, driving without helmets and violation of traffic rules.

“Stern actions, including filing cases and seizing vehicles, would be taken if anyone violates traffic rules,” the joint commissioner warned.

Experts hope that it is easy to stop such accidents -- not by police or by the law. Awareness may prevent these. Families also have an important role to play in preventing these.

In Gaibandha, three riders of a motorcycle died in a road accident as their speedy vehicle hit a milepost in Gobindaganj upazila on Thursday.

A truck rammed into a bicycle in Sadar upazila of In Chapainawabganj in the morning, leaving two riders dead.

The deceased were identified as Mustafizur Rahman, 20, and Minarul Islam, 20.

They both were students of Chapainawabganj Polytechnic Institute.

They were rushed to Chapainawabganj Adhunik Sadar Hospital where doctors declared them dead.

Moreover, a bus smashed a motorcycle at Bhaluka of Mymensingh in the afternoon, killing two motorcycle rivers.

The deceased were identified as motorcycle driver Jakir Hossain, 20, son Fajlul Haque, a resident of Meherabari village, and pillion rider Hamid Quari, 50, of Bashil village, under the upazila.

On information, police recovered and sent the bodies to Mymensingh Medical College Hospital, he added.