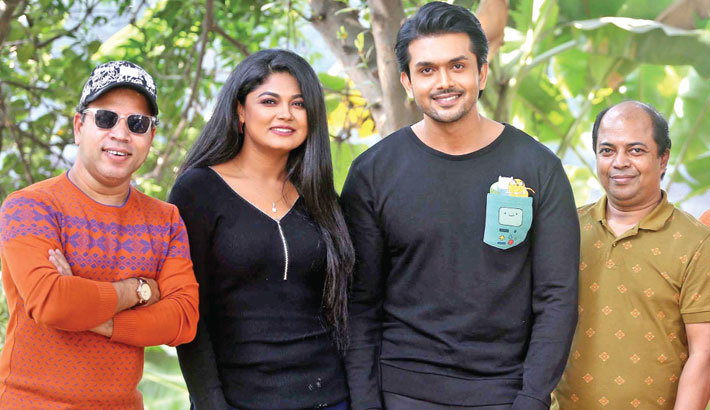 Popular actor Arifin Shuvoo is currently busy with acting in the biopic of Father of the Nation Bangabandhu Sheikh Mujibur Rahman in Mumbai, India. He is playing the role of Bangabandhu in the Shyam Benegal-directed movie. Before leaving Dhaka, the actor completed the shooting of his part for a television commercial (TVC).

Along with Shuvoo, Moushumi Hamid and SaberiAlam will be seen in the TVC. Under the banner of Nandan Audio Vision, Tariqul Islam and Ovi Moinuddin have jointly made the TVC for KSML Steels.

About this TVC, Arifin Shuvoo said (over phone from Mumbai), “This is my first project with this team. They are much organised. This is also my first work with Saberi apa and Moushumi. I'm very hopeful about this advertisement.”

Moushumi Hamid said, “I have worked with Shuvoo bhai for the first time. Tariqul and Ovi bhai made this ad with utmost care. I hope the audience will like it when it will be aired.”

The shooting of the TVC has been completed at a location in Manikganj on Tuesday and it will be aired on different TV channels in March, informed the makers.