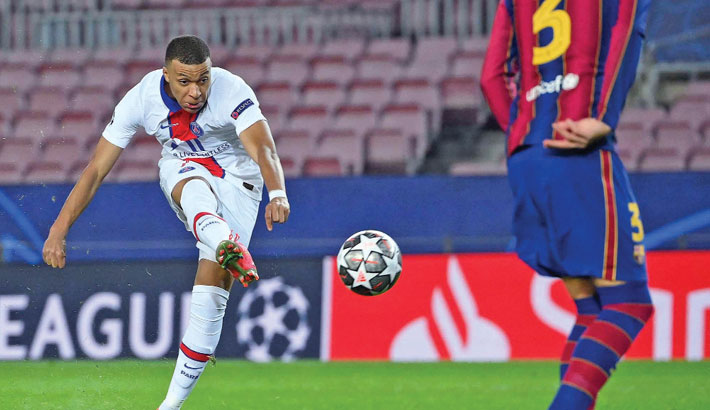 Kylian Mbappe ripped Barcelona apart on Tuesday by scoring a stunning hat-trick in a 4-1 rout to put Paris Saint-Germain on the brink of the Champions League quarter-finals.

Mbappe underlined his status as the rising superstar of world football with a ruthless display of finishing at Camp Nou that will go down as one this competition's most devastating individual performances.

The 22-year-old eclipsed Barca's Lionel Messi, whose opening goal from the penalty spot had been reduced to nothing more than a footnote by the final whistle.

Moise Kean also headed in midway through the second half, carelessly left unmarked from a free-kick as PSG pulled away to win this first leg, and perhaps the tie.

Barcelona will no doubt draw upon the spirit of their astonishing 'Remontada' in 2017, when they won the second leg 6-1 to overturn a 4-0 deficit from the opening game in Paris.

It will certainly serve as a warning for PSG but without fans, and with Mbappe, any hopes of a repeat for Ronald Koeman's side from look faint at best.

"The great footballers write their stories in the biggest matches," said Mauricio Pochettino. "We had no doubts before the game and even less now that we are seeing a top, top player."

Koeman had gambled on the fitness of Gerard Pique, who had not played a game in almost three months due to a knee ligament injury. But to rub salt into the wounds, Pique trudged off late on just as PSG were running riot.

This was a chastening experience for Koeman's youthful side, who had shown signs of a resurgence in recent weeks in La Liga but were exposed against an opponent of an altogether different class.

Koeman was even asked if he wanted to continue as coach but was defiant.

"I accept a defeat and go to work. If I was a person who was very happy when we win and then with a result like today said I have no desire to continue, that would be crazy.

"I know where we are, we have to change, we are not at the end of this road, we are halfway through."

Even without the injured Neymar and Angel Di Maria, PSG were too strong, a breathless, entertaining first half giving way to a French obliteration in the second.

PSG's new boss Pochettino pumped a fist at the end, after a huge early boost to his credibility.