Werner Heisenberg’s ‘Reality and Its Order’ 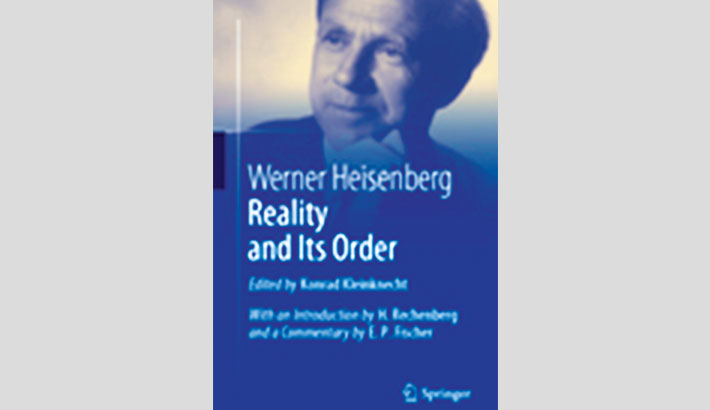 Heisenberg wrote some essays during the Second World War in 1941-42 but he did not think of publishing it. In this essay, Heisenberg summarizes his philosophical thoughts about nature and about the question how man can know what reality is. After Heisenberg’s death, the editors of his ‘Collected Works’ published this text under the title ‘Ordnung der Wirklichkeit’. It appeared in 1989 with Piper publishers and included an introduction by Helmut Rechenberg. In 2019, first time in history this book was translated in English language and published from Springer under the title Reality and Its Order. The book was edited by Professor Konrad Kleinknecht with an introduction by H. Rechenberg and a commentary by E. P. Fischer. The book was translated from German to English language by M. B. Rumscheidt, N. Lukens and I. Heisenberg. Regarding the content of the book, Professor Konrad viewed that publishing this book during the Second World War ‘would have been very dangerous in the political situation’.

Regarding the ideas disseminated in the book, as Konrad puts it, Heisenberg himself wrote to his wife Elisabeth on July 10, 1941 that ‘Towards evening I wrote on the private philosophy, and started the passage about the roses. I now write on these things with great enjoyment. Not always with a clear conscience, because, basically, I understand almost nothing of all these things. But since Bohr probably will not write down his thoughts, it is good that anyone who knows them is writing down what he makes of it. In Urfeld I could maybe seat myself at the little table in the bushes and also continue pursuing these thoughts’.

The essays included in the book are divided into three parts: First part, an Introduction, outlines in three sub-sections The Diverse Areas of Reality, the Language used to describe them, and their Order. The second part begins with the introductory remarks on Goethe’s poetic ordering of the areas of reality which had given Heisenberg the impetus for the essay. It then develops a six-point schema of reality and its order. The schema is built up as follows:  Classical Physics, Chemistry including quantum theory, Organic Life, Consciousness, Symbol and Gestalt and the Creative forces. Third part of the book is some commentary on Heisenberg’s text by E. P. Fischer. In these comments, considering the political conditions of the time, Rechenberg puts it ‘giving perhaps the impression of a consolation of philosophy to his preoccupation with the order described.’

Heisenberg Maintains that the order suggested by the development of natural science follows ancient patterns of thought that found ever new forms of expression at different times. History suggests that Heisenberg was influenced by the German Poet Goethe. Heisenberg thoughts about Goethe and Newton’s theory of colours and observed that the different levels of description of colour by Goethe and Newton are nothing but the different orders of reality.

Heisenberg argued in this book about one world but he saw the different orders, different areas and different idealization of reality. He first presents some areas of classical physics such as mechanics, electricity, magnetism and the theory of the space-time continuum, including the gravitation of matter, this means the special and the general theory of relativity and their consequences for structuring the macro-world. The theory of heat and chemical reaction forms the second area of order and that came under Chemistry. Here the regularities of which are determined by the discontinuous atomic structure of matter, quantum mechanics and the partial intrusion of coincidence into physical description. The third area of reality described in this book is Organic life. In it, ‘the whole’ likely represents more than the mere ‘sum total of all parts’. This concept one may come across when carefully reading Hegel’s philosophy of nature. However, Heisenberg argued that we have both goal-oriented selection and evolution and inherited behaviours. The fourth area, Consciousness is less precisely defined in the book. In this area of reality, Heisenberg mentioned that ‘Only a few attempts have been made to enter an almost impenetrable darkness and access the area where these domains of reality connect one with another and with those of lower order.’

Heisenberg in this section informed that ‘Every electrical intervention on the brain will give rise to ideas, acts of the will, body movements just as every search for ideas must cause electrical and chemical processes in the brain.’ The current thoughts about the emergence of consciousness are not much diverged from what Heisenberg said approximately eighty years ago. Heisenberg also viewed that the manner in which our environment is mirrored in our consciousness is also a direct expression of the biological relations connecting us with that environment. Heisenberg was not precise about depicting human consciousness; rather he mentioned that ‘Perhaps the force active here is once again something holistic that cannot be reduced without coercion into a sum of elements that can be reconstructed and is therefore something cognitively other.’

In the Symbol and Gestalt section of the book, Heisenberg addressed the means of communication, arts, science and the symbols of human communities. Heisenberg argued that in all our understanding and all thinking such as language and writing our thoughts from a symbol to a creative whole move in a particular direction and that leads to a specialized form of symbol that are the precondition for all understanding. He explained this using a rose, rose bud and white rose. In this essay Heisenberg left some question unanswered, as he said,  ‘How that order matches with the orders of the other layers of reality is another question which we will not pursue here any further.’ However, it is clear in his mind about the means of communication that ‘The road from the pure, living symbol to the firmly fixed term of recognition is marked by infinitely diverse intermediate forms that permit an initial level of communication among human beings. This includes, above all, gestures; more original than language and writing, they are able to communicate ideas and emotional content from one human being to another.’

In the section seven, Heisenberg considered the highest form of reality The creative forces. Here he discussed about Religion, Illumination and the Great parable. It is interesting to note here Heisenberg’s view about the real nature of reality. He said, ‘Often it takes a century of experience to produce a single new, decisive thought. Consequently, in order to answer the question what reality really is, one can hardly reply with anything other than the old fairy tale: ‘How long does eternity last?’

At the end of the world, there is a mountain, all made of diamond, and every hundred years a small bird flies there and sharpens its beak; and when the whole mountain is worn down, only one second of eternity will have passed.

In the last section of the book some comments were made by E. P. Fischer. Fischer first addressed the two relevant aspects to understand Heisenberg’s text. One, to imagine the dramatic life situation the author was in the Second World War, where he viewed ‘the political power… by criminals’ is misused to ruin his beloved homeland and its grand culture. Second, Fischer focused on the term ‘reality’ itself, ‘what, actually, is reality’ a question Heisenberg thought always and ‘explored and answered anew’.

Above all, in his introductory remarks regarding the content of the book, Rechenberg, maintained that ‘many years after its composition, those time-specific and personal elements recede in face of the historical significance of the document. Despite all limitations of and objections to it, Reality and Its Order is the great project of Weltanschauung (worldview) and represents at the same time a philosophical-epistemological testament and an honest testimony of the great physicist Werner Heisenberg.’ I do not like to differ with Rechenberg’s comment. Professor Konrad’s skilful editing has made the book more attractive to the readers who are more interested in Physics and Philosophy.