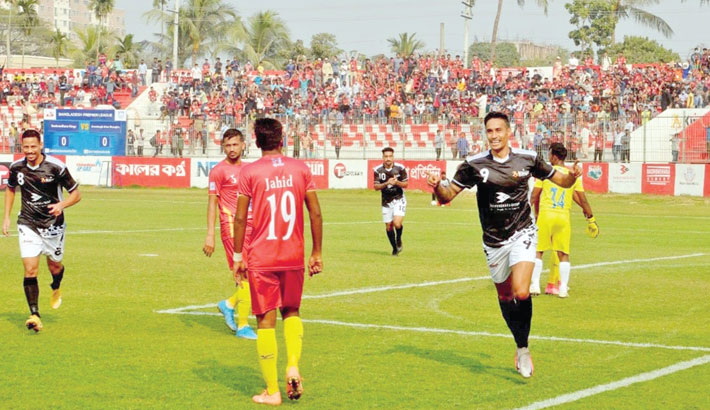 Raul scored goals in the 3rd, 65th, 74th minute while Robson scored in the 32nd, 42nd and 77th minute respectively to complete their hat-tricks and bring their side in a winning way again at the Shaheed Dhirendranath Dutta Stadium.

The spectators in the packed stadium in Cumilla witnessed the beauty of Latin football in a goal-fest as Kings consolidated the top slot in the points table earning 25 points from nine games.

Midfielder Nihat Zaman Ucchash netted the only goal for Arambagh in the 16th minute. Arambagh, who now conceded eight consecutive defeats, are yet to open their account in the league and placed on the bottom.

Raul netted the first goal with a header from inside the box utilising a pass from Tawhidul Alam Sabuz in the 3rd minute (1-0).

However, Arambagh midfielder Ucchash equalised the margin with an assist from midfielder Arafat Mia in a counter-attack in the 16th minute (1-1).

Kings came as a wounded Tiger as put more pressure on their opponents with attacking football.

Robson doubled the margin with a powerful left-footer from the half-space inside in the 32nd minute (2-1).

Arambagh’s misery continued as Robson again scored from the same position with a right-footer in the 42nd minute (3-1).

The holders could extend their lead in the 61st minute while Sabuz netted the ball in the second attempt but the assistant referee cancelled the goal due to an offside.

Raul took no time to score his second goal and Kings’ fourth goal after the cancellation of Sabuz’s goal in the 65th minute (4-1).

Arambagh’s defence fully collapsed while Raul made his maiden hat-trick in Bangladesh with a left-footer from the danger zone in the 74th minute (5-1).

Robson also joined his team-mate to score his maiden hat-trick and to seal the fate of the match in the 77th minute (6-1).