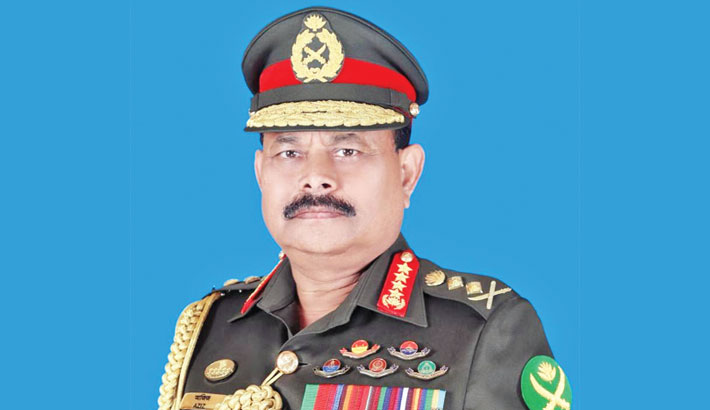 Chief of Army Staff General Aziz Ahmed said on Tuesday that the propaganda (spread by Al Jazeera) will not put any effect on the chain of command of Bangladesh Army.

A propaganda campaign  is being carried out against an institution like Bangladesh Army, which is the pride of the nation, to create confusion, he observed.

“Bangladesh Army is a trained, well-organised force, much more integrated than ever before. The chain of command of the army is very effective. Every member of the army has rejected this ill attempt in the past and they are rejecting

what’s there at present,” General Aziz told reporters at a programme organised by Army Aviation Group at Tejgaon in the capital.

The army chief also answered a number of questions about the recent Al Jazeera documentary show, which has already drawn flak from different quarters.

He said in the context of Al Jazeera's report, “All those who are in our chain of command are aware of it. I want to assure you; this kind of propaganda will not be able to affect our chain of command. Bangladesh Army is respectful of the constitution, determined to uphold Bangladesh's constitution and loyal to Bangladesh government. Always ready to follow any command of the present government. We are constitutionally committed to facing any domestic or global challenges.”

While replying to a query over Al Jazeera’s report on his family members and video footage, he said, “I am asking you. Case has been filed against you, there’s punishment, but if you were acquitted yesterday, and if there is no other case under trial against you. Can you be called a fugitive today?”

“Can it be said that you are a convict? If a convict is acquitted of the charges, he/she is a free person,” he said.

General Aziz said, “There is an explanation of the propaganda against my brothers. We’ll inform you about everything through holding a press conference on behalf of my family.”

“I can say that as an army chief, I am aware of the image of the army, my position and responsibilities," he added.

Regarding his meeting with his brother in Malaysia, the army chief said, “When I met my brother in Malaysia, there was no case against him. That case was due to a conspiracy; from which he was then acquitted. He was released in March, and I went to Malaysia in April. As a result, the propaganda that Al Jazeera is spreading is completely ill-motivated. The day I met him, there was no case against him, nor any sentence,” he said.

In the context of Al Jazeera’s report, General Aziz said: “Video footage was captured during my trips to various countries. I think my security, as an army chief, is confirmed officially when I am anywhere within official capacity. Wherever I go, the host country does it. I do not think there is any necessity to take any additional security measures there.”

“But if I am on a personal trip, may be visiting my relatives during transits, I don’t think I should use the official protocol. I think it is wastage and I shouldn’t do that. If anyone takes advantage of that weakness, their motives are dishonest.”

“After getting our rejoinder, you would understand the purpose of those who are doing these,” he added.

Asked why he was repeatedly targeted, the army chief said: “You have asked why I am being targeted repeatedly. I think I will leave it up to you (journalists). You guys find out why the Bangladesh Army Chief is being targeted.”

“I am fully aware of the fact that the army and the government should not be embarrassed or controversial because of me,” he added.

“Whatever you have heard, there is no evidence of this. They can do it, collecting pieces from different places. But they will not be able to achieve the target. And you (journalists) have already answered them through your writing. So, I am grateful to you (journalists),” he said.

A documentary called “All the Prime Minister's Men” was recently aired on the Qatar-based television channel Al-Jazeera. The documentary was accused of providing misleading and false information.

A demand is growing lauder for a legal action against the channel and a ban on its broadcast in Bangladesh.