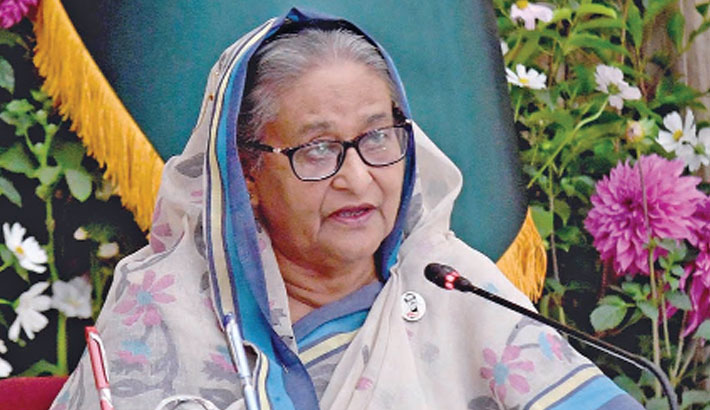 Prime Minister Sheikh Hasina on Tuesday called upon the people to remain alert to any conspiracy to thwart her government’s efforts to build Bangladesh as a prosperous country.

“There is a chance of an attack in the country when it starts making progress and people start dreaming of leading an improved life,” she said, urging people to stay alert to such conspiracy.

Executive Committee of the National Economic Council (ECNEC) at NEC conference room. She joined the meeting from her official residence Ganabhaban.

Referring to the killing of Father of the Nation Bangabandhu Sheikh Mujibur Rahman, she said, “The incident like 15 August took place when a good environment was created in the war-ravaged Bangladesh, the country saw bumper crop production, industries were opened and the country was moving towards development.”

She said her government has been working tirelessly with limited resources to change the lot of people and offset the impacts of corona pandemic which has hit hard the world economy.

Mentioning that Bangladesh has been able to keep corona situation under control with its all-out efforts, the premier said “We’ve given directives [to tackle it], announced stimulus packages and started vaccination even though many developed countries are yet to roll it out.”

Regarding the collection of Covid-19 vaccine, she said the government contacted all when the initial research started and booked vaccine in advance so that Bangladesh gets the jab after its production.

“We’ve been able to do that and set an example,” she said, expressing gratitude to all involved in the process.

Sheikh Hasina expressed the hope that there will be no corona impacts anymore on Bangladesh as people of the country are very much conscious about the deadly bug.

About the 8th FYP, she said the government has approved it earlier and started its implementation to pull the country ahead, maintaining the ongoing pace of development.

The premier said implementation of the 8th FYP will be a tool of achieving the Perspective Plan for Bangladesh of 2041, adding the 9th FYP will also be needed for it.

Bangladesh achieved independence through a long struggle and the government is working to build Bangladesh as prosperous nation as dreamt by the Father of the Nation,” she added.

The premier has directed road transport and bridges ministry to introduce toll on all the highways.

She made the directive while giving nod to Dhaka-Sylhet four-lane project at the Ecnec meeting, Planning Minister MA Mannan said while talking to reporters after the meeting.

Collection of toll will not only increase revenues, but also help doing maintenance work of the national highways, the premier said. In this regard, she also asked authorities concerned to open a separate bank account to deposit the money collected as highway tolls.