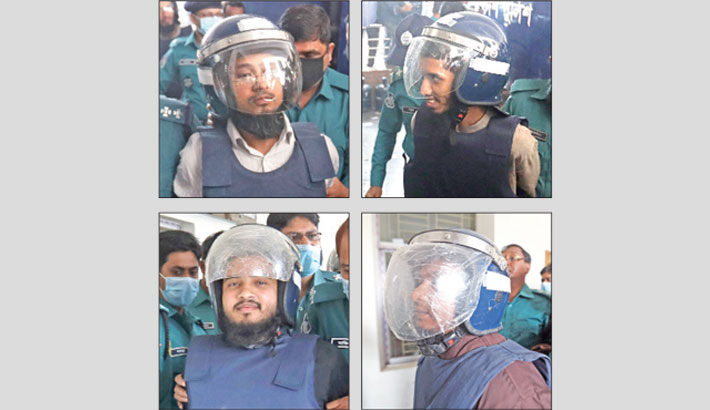 A Dhaka court has sentenced five members of banned militant outfit Ansar Al Islam, including its alleged kingpin Major (sacked) Syed Ziaul Haque alias Zia, to death and another one to life imprisonment for killing blogger Avijit Roy in 2015.

The court also fined each of the convicts Tk 50,000. In case of failure of pay the fine, Farabi will have to serve two more years in prison.

Two of the convicts -- Zia and Akram -- were tried in absentia while the rest are behind the bars.

Avijit, a Bangladeshi expatriate living in the US and founder of Mukto-Mona blog, and his wife Rafida Ahmed Bonya were attacked by some unidentified assailants near TSC on the Dhaka University campus on February 26, 2015 while they were returning from Amar Ekushey Book Fair, leaving them injured.

Avijit died at a hospital after an hour. Bonya who sustained critical injuries was later flown to the US.

On March 14, 2019, the Counter Terrorism and Transnational Crime (CTTC) unit of Dhaka Metropolitan Police pressed charges against the accused. The case was transferred to the Anti-terrorism Special Tribunal on March 25 of that year.

The court took 31 working days to complete the trial after framing charges against the accused on August 1, 2019.

A total of 28 prosecution witnesses, including Prof Ajay Roy, testified before the court in the case. Prof Ajay Roy passed away on December 9, 2019 in his wait for judgment.

On February 10 last, the same tribunal awarded maximum punishment to eight militants, including Zia, Akram, Sohel and Mozammel, for murdering Jagriti Prokashani publisher Faisal Arefin Dipan at his Aziz Supermarket office in the capital on October 31, 2015.

In the verdict, the court had observed that the militants had attacked bloggers, writers and publishers as part of their campaign to silence freethinkers and that the death penalty is the only appropriate punishment for the heinous murder.

According to the verdict, extremists killed Dipan for publishing a book of slain Avijit as part of their war against freethinkers.

The goal of Ansar Al Islam was to destroy the democratic and non-communal character of the state, the court further said.

Zia is the alleged mastermind of the killings of bloggers, prominent writers, publishers, university teachers and students. He was wanted in a number of militancy cases.

On August 2, 2016, the Home Ministry declared a Tk-20 lakh bounty for information leading to the arrest of the militant kingpin.