Windies over the moon after incredible series win 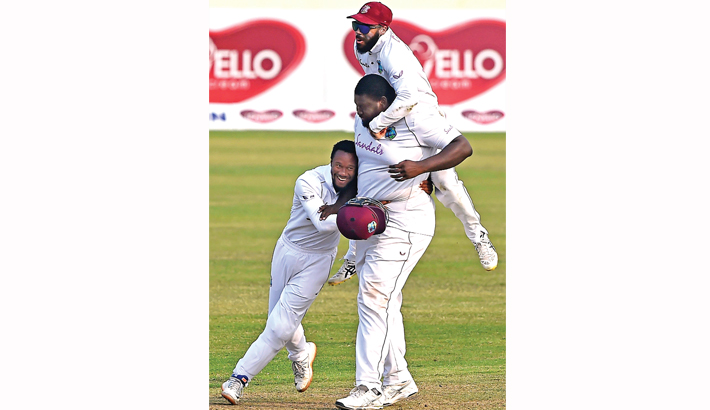 West Indies John Campbell, top, with teammates Rahkeem Cornwall, right, and Sheyne Moseley celebrate the dismissal of Bangladesh batsman Liton Das (not pictured) during the fourth day of their second Test at the Sher-e-Bangla National Cricket Stadium in the capital on Sunday. – AFP PHOTO

Only a few very optimistic people in the cricket fraternity might have seen West Indies with any chances against Bangladesh in their backyard before the start of the two-match Test series earlier this month.

The Caribbean side was struggling to make a best possible Test squad after some of their core players opted to skip the tour of Bangladesh citing personal and COVID-19 fears.

The hopes of giving any fight from the visitors looked too much to expect when their one-day international side conceded a 0-3 hammering against Tigers in the ODI series just before the start of the Test series.

However, Kraigg Brathwaite and his team-mates had belief in themselves and they started to gather momentum when they took on a Bangladesh Cricket Board XI in a three-day practice-match in Chattogram as part of their preparation of the Test series.

Whereas the maximum number of West Indies’s first XI players in the Test series took part in the contest and got adjusted to the hostile condition here in the sub-continent through preparation in that game, Shadman Islam remained as the only representative from Bangladesh Test squad in that game, who also had to skip the second Test after suffering a hip injury.

While West Indies players were sweating hard to bring some respite in their camp, Bangladesh cricketers opted not to take part in any kind of warm-up match despite being out of the longer format for nearly one year.

If chasing a target of 395 runs in the fourth innings, highest ever run-chase in Asia was just a cricketing miracle then West Indies’s defending 231 runs in the Dhaka Test proved that only determination, dedication and hard work are essential to overcome any obstacles and cricket is just a game after all.

“This means everything, you know. Cricket is our sport and the fans will be proud of the guys,” Brathwaite said after West Indies clean-swept Bangladesh and clinched their first Test series win hereafter 2012.

“They wrote us off before the series started but we knew we could do it. We just had to stick to our plans and that’s exactly what we did. We kept it simple, we enjoyed it and we proved them wrong,” he added.

West Indies played with a relatively inexperienced side compared to Bangladesh in the series but the young guns hardly took any time to justify their selection in the team.

Kyle Mayers, Nkrumah Bonner, who made their Test debut through the series, were surely the findings for West Indies, who can now dream big with these cricketers along with players like - Joshua Da Silva and Rahkeem Cornwall, who are still new to this format.

Mayers’ innings of unbeaten 210 runs in the first Test will surely be cricket legends for years while Bonner, Joshua and Cornwall impressed with their consistency throughout the series.

“Yes, I’ve spoken to the senior guys. They said it’s important to keep patience in Bangladesh because of the nature of the wicket,” said Bonner, who made second highest 231 runs in the series with two crucial fifties.

Cornwall, who was at the receiving end for his physique since coming to Bangladesh, had proved one thing for sure that size actually doesn’t matter if someone is truly dedicated to his work.

The 28-year old finished the series as the highest wicket-taker with 14 wickets and his match figure of 9-179 in the second Test gave Bangladeshi spinners a message that the time of traditional bowling has come to an end.

“Once the condition gives a little bit of a spinning advantage, I do like it, as I’m a spin bowler. As I have the job to spin the ball, so it just backs me up to put the balls into the right area,” said Cornwall.

“I’ve been doing a lot of work in the morning with my catching in the slips and it does back me up. As when the ball comes to me, I make sure that I’ll catch,” said Cornwall, referring to his fine low catch of Mehidy Hasan at slip which was the final nail in Bangladesh’s coffin from the Caribbean side.